Final Fantasy Wiki
Register
Don't have an account?
Sign In
Advertisement
in: Gameplay in World of Final Fantasy 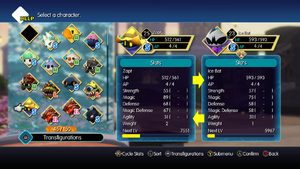 You're here to manage your prismariums?

The Prism Case is an important item in World of Final Fantasy that is used for storing and managing the player's prismariums. It is manned by Serafie in Nine Wood Hills and becomes available in the middle of Chapter 1, "Land of the Lilikin".

When the player has Mirages in their party, they can use the Prism Case to swap out Mirages, or store them for later use. The player can access the Prism Case by talking to Serafie directly, using a Save Crystal or Gate, or by using Seraphones.

If the player has a full party and imprisms any Mirages in battle, the player is given a choice to swap out Mirages already in the party or to leave the new Mirage with Serafie in the Prism Case.

When accessing the Prism Case, the player can view all their stored Mirages. They can be sorted by the order as they appear in the Mirage Manual, their size, level, and weight. Icons of the player's active Mirages, stacked or not, are shown on the top of the screen. Placing the cursor over a Mirage allows the player to view and cycle through its statistics, shown on the right side of the screen. The party's active Mirages are organized by size—S, M, then L—in the following order: Mirages in the player's stacks based on the forms Lann and Reynn appear on the field, Mirages in the stacks of the twins' opposite forms, then Mirages not in stacks at all. XL-sized Mega Mirages appear last in this lineup.

The player can choose to do several things with a Mirage when selected: the player can remove it from their active party and place it inside the Prism Case; swap out the Mirage for one inside the Prism Case; pull up the submenu to manage its Mirage Board, the stack setup, its abilities, or dismiss it; or change the Mirage into different forms (if any) by "transfigging" it.

Pulling up the submenu allows the player access to the Mirage Boards, Stack Setup and Abilities menus from the main menu.

Dismissing a Mirage unimprisms it and permanently removes it from the Prism Case. Story-related Mirages, or unique ones imprismed at The Coliseum or post-game bonus dungeons, cannot be dismissed. If the player dismissed certain Mirages, such as Gilgamesh or Mel, their respective prisms reappear in the player's Prisms inventory for them to imprism them again (their level is reverted back to 1 and Mirage Board is reset, however).

If a Mirage has access to another form on their Mirage Board, either by reaching a certain level or acquiring their respective memento, the player can use the Prism Case to transfig the Mirage to any form they wish.

Initially, the Prism Case can hold up to 150 Mirages (and their transfigurations), but the capacity increases as the story progresses.

Mirages inside the Prism Case do not gain EXP when the player's party wins battles.

After recruiting all seven of the Pleiad and reviving Tama during the Postscript, "Turn Those Corners Up", talking to Serafie at that time only allows the player to face the final bosses, so they will not be able to access the Prism Case using this method until completing every Intervention quest and acquiring the first secret ending. The player can still access the Prism Case by other means, however.

After clearing the Postscript and acquiring the first secret ending, Lann and Reynn can be removed from the player's stacks. A sibling's prismarium can be placed inside the Prism Case only if there are Mirages present in the stacks of both the sibling's Jiant and Lilikin forms. Doing this does not remove the sibling from the field, however, and the form they assume on the field determines the Mirage stack in battle.

[view · edit · purge]In optics, a prism is a transparent optical element with flat, polished surfaces that refract light. The traditional geometrical shape is that of a triangular prism with a triangular base and rectangular sides, and in colloquial use "prism" usually refers to this type.