A spunky lass who uses a rough form of hand-to-hand combat in battles. Prishe enjoys exploring the world freely with her child-like, rowdy behavior and rude words.

Prishe is a secret playable character in Dissidia 012 Final Fantasy, appearing with Shantotto as the second representative of Final Fantasy XI. Prishe is a combination Monk and White Mage and also fights with magic and weapon skills. In her world, she was once intended to be the vessel for Promathia, the Twilight God, until the darkness inside of her was crystallized, turning her immortal. Along with Selh'teus, Prishe was instrumental in Promathia's destruction. Like Shantotto, Prishe is a warrior of Cosmos and, as a secret character, she has no impact on the main storyline and no villain opposing her. However, she is mostly responsible for recruiting the Warrior of Light to Cosmos's side.

In order to unlock her as a playable character, the player is first required to beat the entirety of the Dissidia 012 storyline, then complete the first chapter of the 013 story. After this has been accomplished, the player will need to go to the "Reports" section and beat all of the scenarios in "Report 8". Doing all of this will unlock both Prishe and Gilgamesh in the PP Store for purchase as playable characters, which costs 300 PP each. Prishe is the second representative character for Final Fantasy XI after Shantotto, and the second playable Monk-class character (both of whom are female) after Tifa Lockhart from Final Fantasy VII.

Prishe is identical to her appearance in Final Fantasy XI.

She is an Elvaan woman with long lavender hair, pointed ears, and blue eyes. She wears black shorts with a black top and frilly purple sleeves, a gold and silver peineta on her head, and tan boots. She also bears a blue crystal amulet on her chest.

Prishe's first alternate outfit "Custom Corsage+" recolors her top and sleeves white, her ribbon blue, her amulet red, and her boots and shirt black and white.

Prishe's second alternate outfit "Magna Top" is based on the Magna Top and Magna Shorts for the Sunbreeze Festival event in Final Fantasy XI, which takes place during real-life summertime.

Prishe wears brown sandal-boots and a bikini-like blue and brown top. Rather than the blue bikini bottom present in the original Magna attire, Prishe retains her frilly black shorts.

Prishe's manikin, the Horror of Antiquity, is brown.

Prishe normally fights barehanded. In her EX Mode she equips a pair of Destroyers, a fist weapon from Final Fantasy XI. As part of her EX Burst, she hurls the Star of Tavnazia, a piece of black magicite that was critical to the climax of the Chains of Promathia expansion main questline.

Prishe is a confident, brash, foul-mouthed, tomboyish Elvaan woman. She can be protective since she battles Garland when he was taking the Warrior of Light from her.

Prishe fought for Cosmos in several precious, unspecified cycles. One day on her daily patrol she arrives back at Order's Sanctuary from her daily patrol just after Shantotto defeats Gabranth. Shantotto accuses Prishe of using her patrols as an excuse to wander and explore the world, which Prishe's reaction confirms. Before Shantotto can continue, Prishe runs off, stating that she'll bring her back a souvenir.

Sometime later, Prishe ends up at the Chaos Shrine and vents her boredom with the world, having explored most of it. As she's about to leave, she feels an unfamiliar presence nearby and discovers the Warrior of Light, who is shining brightly. She questions his identity and allegiance, but before she can get useful answers, Garland appears, baffled by the Warrior's appearance, and attempts to take the Warrior from Prishe. Prishe fends off Garland and leaves with the Warrior. Returning with the Warrior, Prishe asks Cosmos to make him one of her chosen warriors, concerned with what may happen to him if Chaos were to capture him. While the goddess is unsure at first, both Prishe and Shantotto convince her to do so.

Later at the Empyreal Paradox, Prishe and the Warrior begin to discuss the Warrior's lack of memories. While the Warrior claims that he does not need memories, and that as long as he fights he has a use, Prishe argues that emotions are more important and that he should take strength from them. The talk of memories reminds Prishe that the Warrior doesn't remember his own name. She sits down on the ground for several moments in contemplation before jumping up and running to the Warrior, saying she knows exactly what they'll call him.

When Gilgamesh finds his way back to World B, he comes across Prishe. Prishe asks if he is a warrior for Chaos or Cosmos, and Gilgamesh misunderstands her and declares himself "a chaos warrior". Taking his mention of an archenemy to refer to her, Prishe and Gilgamesh battle, and afterwards Prishe witnesses Gilgamesh be consumed by a portal to the Rift. She reports the incident to Shantotto, eventually motivating the mage to find her own way into the Rift to escape the cycle.

In a later cycle Prishe battles Gabranth, and though she is victorious Gabranth reveals he was merely buying time for Garland to dispatch Cosmos. Prishe fades away from the cycles with the goddess's death, her last words bidding farewell to the Warrior of Light and telling him to not forget his name.

Even though the Warrior no longer has any memories of Prishe due to his multiple purifications, the lessons she taught him are responsible for shaping his personality. This is best seen when he is talking to Bartz at the Empyreal Paradox, with the latter wanting to give him a name. The Warrior refuses, claiming that he has a faint of memory of someone calling him by name, and not wanting that memory to be lost to a new identity.

After the player defeats the Southern Lufenia Gateway to access the northern continents, Prishe can be found wandering north-east of the Pravoka teleport stone, provided she is not currently in the player's party. When spoken to she says that nothing they think or do matters as it will eventually be lost and forgotten, and fighting is what equalizes everyone. As the world of Confessions of the Creator is a hypothetical nightmare world where the cycles of war kept going and Feral Chaos killed all summoned warriors, this Prishe is likely a spectre of the Prishe of this alternate world. She vanishes when the player advances past the Mirage Sandsea to the Lands of Discord.

Prishe is described as a Combo Blitzer. She has a variety of Bravery attacks, some of which she can combo without hitting or charge for greater power and to crush guards. She also has the ability to chain her Bravery attacks into each other to deal additional damage, and combining them in the proper way can result in a Skillchain that adds an extra hit for more damage. This makes Prishe's Bravery attacks very powerful and she can deal heavy damage with long combos that execute quickly. Prishe is also one of the fastest characters in the game, and the third-fastest while in EX Mode, trailing only Feral Chaos and Tidus in their own EX Modes. Her major weaknesses are a lack of ranged attacks and slow HP attacks, which all have a long start-up and low range. She is most suited to close-range combat and is reliant on Assists or punishing a blocked attack to be able to land an HP hit.

CP and AP costs for Prishe's follow-up attacks are shared between base attacks, so once Prishe masters a follow-up under one base Bravery attack, it is mastered under all of them. Of her base Bravery attacks, only Banish and Holy cannot have follow-ups set. Prishe learns her follow-up attacks at the same level as she learns the base attack. All of Prishe's Skillchains have the same power and deal Physical damage, the only difference between them is their name and appearance.

Additional effects during skillchains are determined by their second attack. 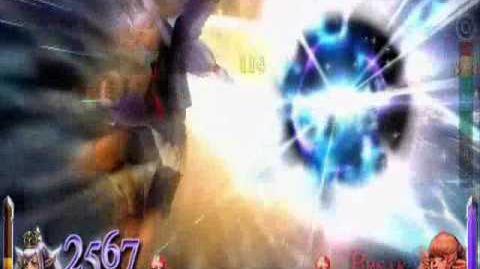 Prishe's EX Mode, Two-Hour Ability, equips her with a set of hand-to-hand weapons called Destroyers, and gives her both Regen and the ability "Hundred Fists", the two-hour ability for Monks in Final Fantasy XI. Hundred Fists increases Prishe's movement speed and allows her to chain up to three weapon skills in a combo, performing the follow-up attack twice and possibly resulting in two Skillchains to highly increase her damage output.

Prishe's EX Burst is The Five Lights, where she attacks her opponent with magical punches and Banishga before five orbs of light appear around Prishe and the opponent. The player has to enter the button commands shown on the screen as Prishe dashes to each orb and kicks it at the opponent. If done successfully, Prishe ends the EX Burst by throwing a piece of magicite at the opponent, consuming them in an energy explosion. The sequence of the input buttons always moves clockwise around the control pad, with the first and last inputs being the same - for instance, if the first button is

, the combination will be

Prishe talking with the Warrior of Light.

Prishe in the Chaos Shrine.

Prishe was originally considered as the possible Final Fantasy XI representative character for Dissidia Final Fantasy, but the role was ultimately given to Shantotto instead. Prior to her inclusion in Dissidia 012, Eald'narche and Kam'lanaut were considered to appear fighting for Chaos but were rejected.[1]

After purchasing her secret voices in the PP catalog, all of Prishe's attack quotes when using an HP attacks, entering EX Mode, and initiating her EX Burst, will randomly be replaced with these new quotes.