Prishe appears as a secret playable character in Dissidia 012 Final Fantasy. She does not appear in the main storyline, and is exclusive to the Reports. In a past cycle of the war she regularly explored World B under the pretense of "patrolling" in order to get out of Order's Sanctuary and away from Shantotto. It is on one such patrol that she finds the Warrior of Light, appearing as a confused new entity in the world.

Garland also finds the Warrior, and he and Prishe battle to see which god he will serve. Prishe prevails and takes the Warrior to Cosmos to become one of her warriors. When the Warrior tells Prishe he has no name, Prishe comes up with a name for him, but the player never hears it. By the time of the 12th cycle Prishe has vanished and the Warrior has forgotten her, but retains the faint memory of someone calling him by name.

Prishe's first alternate outfit is a palette swap of her base outfit that gives Prishe a white jacket and black skirt and slacks. Her second alternate outfit is based on the Sunbreeze Festival's "Magna Top", giving her a blue and brown skirt over her slacks and a blue bikini top. 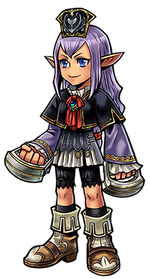 Prishe appears as a playable character.

Prishe appears as an unlockable character, and is obtained by collecting Purple Crystal Shards.

Prishe is solid in both offense and defense, maintaining high power to mow down enemies while also restoring health to the party, also possessing one of the highest Hit Points that can be boosted further. She has several other augment abilities to boost her agility and luck, albeit at the expense of both offense and defense. Overall, she's an offensive tank with good recovery skills.

A fine specimen of the proud Elvaan race. Though brash and rude, Prishe is far older than she looks and her words may hold great significance. Her strength will guide her and her frailty will bring her a new life...

Tornado Kick (SSR+).
Add a photo to this gallery

One Inch Punch (SSR+).
Add a photo to this gallery

Prishe is a playable character who could initially be recruited during the Challenge Event Women of the World as a First Time Reward for completing the event's Beadeaux, Part 2 stage on Classic difficulty. 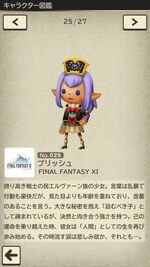 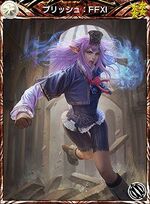 Trading card of Prishe's Manikin, Horror of Antiquity.
Add a photo to this gallery
Final Fantasy XI
Retrieved from "https://finalfantasy.fandom.com/wiki/Prishe/Other_appearances?oldid=3237405"
Community content is available under CC-BY-SA unless otherwise noted.