A girl once referred to as "that detestable child", Prishe has been raised by the cardinal and schooled in the ways of theology...

Prishe is a non-player character from Final Fantasy XI, and is one of the main characters in the Chains of Promathia story. Prishe is an Elvaan living in the Tavnazian Safehold, since her former home in the once prosperous Tavnazian Marquisate was destroyed during the Crystal War 20 years ago. She mysteriously does not age, causing many to label her as a demon—the reasons for which are explored in the story. Prishe is a tomboy who is well known for her impulsive attitude and forthrightness. 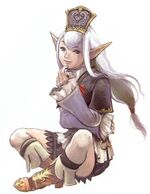 Prishe has dark skin and pale blue hair that falls to the small of her back, with two bangs that frame her face. She wears a cropped short-sleeved black jacket held closed with a red ribbon and blue brooch over a long, high collared black and white top with criss-crossing up the sides and long violet sleeves. Patterned black shorts stop above her knees, and she wears brown heeled boots that fold over the top. Small gold designs pattern her clothing, from the trimmings of her jacket and the sleeves of her top, to the gold adorning the small black hat atop her head.

Prishe is tomboyish, confident, loud, no-nonsense, impatient, excitable, easily agitated, and foulmouthed. Despite this, there are times when she becomes depressed, such as during revelations about her destiny, and the prospect of her immortality, even uncharacteristically shedding tears about it at the end of Chains of Promathia. This has led her to become very self-sacrificing, believing her life is of little worth, contrasting several antagonistic Final Fantasy characters who often go insane upon such discoveries.

Prishe was born an unknown amount of time before present-time Vana'diel, and raised in the Tavnazia Cathedral. As a child, she was believed to have a special destiny. Later, during her baptism by the Eye of Altana, darkness inside of her crystallized, forming a solid crystal on her chest.

Since this day, she has not aged a day, injuries that would kill most people did little to her, and monsters seemed to stay away from her. This earned her the title of "that detestable child", or "the abhorrent one", leading her to be hated by many since then, and was locked away, and prevented from leaving the cathedral.

After her accident, she met Cardinal Mildaurion, who gave Prishe an amulet, the true purpose of the artifact being that Mildaurion could control her thoughts, one that she would wear everyday for years to come. She allowed Prishe outside of the cathedral for short periods of time and trained her as one of Tavnazia's theologians. During one of her trips, she met a young Ulmia, who earlier was unable to make it into the cathedral's choir due to stage fright, and cheered her up. Later, during the fall of Tavnazia during the Crystal War, Prishe helped many people escape the city's ruin to what would be later known as Tavnazian Safehold. During the next twenty years, she would protect the Safehold from Beastmen who were on the island, and gradually people forgot about her as "the abhorrent one".

During the course of Chains of Promathia, Prishe spends most of her time on her own, often going ahead of the Adventurer to accomplish various goals such as finding an airship to go back home, or running away from The Sin Hunters who want to capture her because of her connection of the Cardinal, who, at that time, is a controversial figure, and her Magicite.

While wandering San d'Oria, she is attacked and her amulet is stolen. Unconscious, her dream-self is transported to the realm of Diabolos, and here she encounters Selh'teus, and learns about the Keeper of the Apocalypse, a person who will usher in Promathia into Vana'diel, so that he could destroy it.

In the later parts of the storyline, she searches for the Star of Tavnazia, a precious magicite that had been placed in the cathedral, but was lost during the Crystal War, before running off again.

At several points in the campaign, various clues point to Prishe being the Keeper of the Apocalypse, something that she accepts without question, though Bahamut tells her she is not the Keeper.

In the final chapter of the story, Prishe helps the Adventurer and Selh'teus fight against Promathia, and deals a major strike against him by shattering his barriers with her dropkick and throwing the Star of Tavnazia into his face, hoping that it will send some of his power to the Mothercrystals and weaken him.

At the end, when Tavnazia finally has Jeuno's total support for its rebuilt, Prishe is said to be groomed as Tavnazia Cathedral's next Cardinal. But still as rowdy as ever, she often slacks off from her training and runs off for her 'workouts', as she puts it, which she spends looking over the Safehold from nearby hills. she tells the Adventurer her views of eternal life, just before the crystal in her chest vanishes, making her mortal again. Shedding joyful tears, she comments that mortal life is 'troublesome', before happily running away.

She appears again in Apocalypse Nigh, where she acts polite and timid, saying that this is how she really acts now that she is mortal, though Ulmia tells her to 'stop fooling around'. Prishe, now assuming her normal personality, says that she wanted to 'spice up' her reunion with the Adventurer.

She is present during the battles against the Zilart and the Shadow Lord, protecting Ulmia from them. She also witnesses Lion appearing, and says that she had seen her in her dreams, then tells the Adventurer to keep the promise they made to Lion.

Prishe has appeared in the following media throughout the Final Fantasy series:

Prishe in the Tenshodo headquarters.

Prishe and Ulmia at the end of Chains of Promathia. 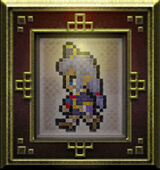 Prishe depicted in the "Duelist Board" furnishing.