Cid Pollendina: Oh, shut up and help me remodel the Princess Sarah (World of Final Fantasy) page!
Please expand this article into a full one. The following tasks need to be completed:This request can be discussed on the associated discussion page. Remove this notice upon completion.

Princess of Cornelia and its ruler. Unable to abide the dire situation she finds her kingdom in, she fearlessly charges right into the heat of battle.

The following is a list of quotes uttered by Princess Sarah when talking to her inside Castle Cornelia. 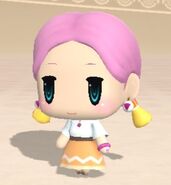 Princess Sarah disguised as a Commoner.

Asking about the twins.