Sarah is a princess of Cornelia. Her abduction by the corrupt knight Garland triggers the plot into motion. Upon being rescued, she gifts the Warriors of Light with a Lute, which they later use to progress in their quest.

Princess Sara of Sasune meets the party while on her way to stop Djinn of Fire. Later, she would help save the light warriors from the Curse of the five wyrms, along with Desch, Alus Restor, one of the Fellows, and Cid Haze. In the 3D remake, she and Ingus have a small love story.

Sarah is Garnet's real name, before she was adopted by Queen Brahne. The player must go to Madain Sari on disc 4 and reveal the hidden text on the Eidolon wall to find this out. This makes her the first playable Princess Sarah in the series.

Sarah is one of the four Warriors of Light, traveling to save the crystals from the Avalon Empire. It is later revealed that she is the second princess of Burtgang. Thus, this revelation makes her the second playable Princess Sarah. 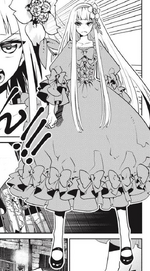 Princess Sara Mysidian is the princess of Mysidia, a nation renowned for its magic prowess. Sara herself often skimps on her duties, preferring to escape the confines of the royal palace to adventure about town. She encounters Shogo Sasaki and his party as she looks for her gaelicat Lukahn, that had recently escaped and promised to allow them to look in the Mysidian library for the info on the mythical spell Raise if they helped her find Lukahn.

Finding the gaelicat on top of a clock tower attempting to craft wings for himself, Sara rushed to his side but was quickly threatened by the Magus Sisters. Realising they could not defeat them and noticing Lukahn's nature, Shogo pushed Sara off the building with the gaelicat casting Float, allowing them to survive the fall.

Once in safety Sara found Shogo and his party arrested, mistakenly thought to have aided the Magus Sisters as terrorists. While she persuaded them be freed temporarily, they were once again arrested and taken to be executed without trial. Sara however confronted her father, king Alus Mysidan the 36th, at the execution and claimed her right to become next in line to the throne as king and cleared Shogo's party's names.

Sara herself participated in the various battles with the Magus Sisters and the Calcabrina dolls in their attempt to steal the Lunar Curtain, a treasure that once belonged to the first king of Mysidia, Alus.

Sara resolved to help destroy the stark class divide that permeated through Mysidia. 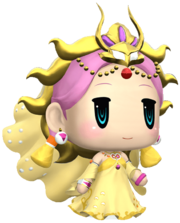 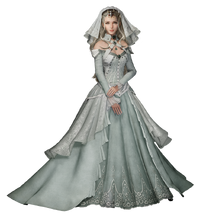 Sarah appears as the princess of Cornelia in Stranger of Paradise, guiding Jack Garland in his quest of killing Chaos.

Schala is a princess of the Kingdom of Zeal. Her Japanese name is (サラ, Sara?).

In the webcomic parodying the original Final Fantasy, Sarah is so used to being kidnapped that she's become accustomed to it. She decides to help Garland learn to become a villain because of his incompetence, and after being rescued seizes control of Cornelia from her father through trickery. Her evil appearance is based on Princess Sara Altney while her standard appearance is a recolor of Aria Benett's sprite.

The name Sarah (セラ, Sera?) appears within a list of unused playable character data within Final Fantasy VI game's data. It is unknown if it would have been the name of a princess or not.

Despite not being a princess, Serah Farron from the Lightning Saga uses an alternative form of the name Sarah. Her Japanese name Sera (セラ?) spelled the same way as the dummied Sara from Final Fantasy VI. Serah's role in Final Fantasy XIII and Lightning Returns is also similar to the Princess Sarah in the early games, a non-playable character that needs to be rescued.

The name of Fina from Final Fantasy Brave Exvius is a short form of "Serafina", and also plays on the term "Final Fantasy".