Non-player character
The Prince of Elfheim, also known as the Elf Prince, is a minor character from the original Final Fantasy. He resides in a castle at Elfheim and is put into a deep sleep by the evil dark elf Astos. The Warriors of Light find Astos and defeat him, and later use a special potion, the Jolt Tonic, created by Matoya to revive the prince, who gives the heroes the Mystic Key.

The Prince of Elfheim is simply referred to as Prince within the episode. Much like in the game, Astos disguised as a friar enchants Captain N to poison the Prince's drink which puts him into a deep sleep. He later wakes up after drinking a brew made from a green herb by the Witch.

Artwork of the Prince of Elfheim in Nintendo Power.

Artwork of the sleeping prince from Nintendo Power. 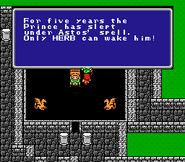 [view · edit · purge]"Álfheimr" is one of the Nine Worlds of Yggdrasil in Norse Mythology. Álfheimr was inhabited by the light elves, and the name of the world literally translates as "elf home."