The battle garb of the Lucian prince. Designed to protect the heir to the throne and increase his health.

Prince's Fatigues (ルシス王子の戦闘服, Rushisu Ōji no Sentō-fuku?, lit. Lucis Prince Combat Uniform) is a recurring armor or outfit in the Final Fantasy series, exclusive to Noctis Lucis Caelum and generally is his default appearance. Because Prince's Fatigues is Noctis's default attire, he also wears it in his various spin-off appearances; this article lists instances where it is an equippable outfit/attire.

Prince's Fatigues comprises of an unzipped black jacket with skull-motif buttons and sequenced details on pockets, and a black motorcycle glovelet on Noctis's left hand. Underneath, he wears a steel gray shirt with skull prints, and he wears black cropped trousers and buckled boots with red soles. The clothing is designed by Hiromu Takahara, creative director of the Japanese designer clothing label Roen as part of a collaboration with Square Enix. Roen has sold a physical version of the outfit in its stores in Japan. Noctis's initial clothing design by Character Designer Tetsuya Nomura was a placeholder, to be replaced with an ensemble by Roen.

The contract Square Enix made with Roen when they first started making Final Fantasy Versus XIII contained a number of designs for the game. The designs contracted during that point are still used for Final Fantasy XV. Director Hajime Tabata has explained that black has historically been treated as a special color in Lucis. Thus the attire of the royal family, and those in occupations closely tied to it, wear black.[1]

Noctis wears the Prince's Fatigues during the crossover event A Nocturne for Heroes. Players can obtain them from the final quest of the event,

Messenger of the Winds. It is split into four items that can be equipped by all classes: the Lucian Prince's Jacket, Fingerless Glove, Bottoms, and Boots. All of the items are level 1 with no attributes, making them suitable only as glamours. 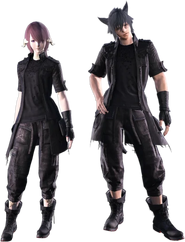 Armor
Community content is available under CC-BY-SA unless otherwise noted.