To have been able to come this far... I'm so glad I was able to meet you!

Primm is a character and summonable vision from Final Fantasy Brave Exvius. She is a cameo character from Secret of Mana.

Primm's stats at her highest levels are as follows (with no passive abilities taken into account), along with the maximum amount of stat points that can be increased through pot-enhancements: 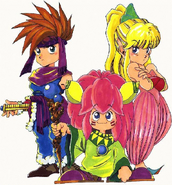 Randi, Primm and Popoi's appearance in the original Secret of Mana. 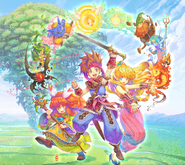 Randi, Primm and Popoi's appearance in the Secret of Mana (2018).