Large-scale robotic weapon. Development was discontinued because it was deemed too dangerous. Chadley used the project data to recreate a prototype within virtual reality.

The Pride and Joy Prototype is an optional superboss in Final Fantasy VII Remake, fought at the end of the "Three-Person Team vs. Top Secrets" challenge in the Shinra Combat Simulator in chapter 17, "Deliverance from Chaos", on hard mode. Defeating it earns the Götterdämmerung accessory that allows the wearer to start all encounters with a full limit break gauge and their limit recharges faster during battle, coupling excellently with the

To face the Pride and Joy Prototype, the party must survive a gauntlet of summon battles, beginning with Shiva, followed by Fat Chocobo, Leviathan, and Bahamut (who will also summon Ifrit).

The boss appears to be a prototype of the Proud Clod boss from the original Final Fantasy VII, hailed as the crown jewel of Shinra's weapon development.

An improved version of it, called Pride and Joy Mk 0.5, can be fought in "Episode INTERmission", also in the Shinra Combat Simulator.

Pride and Joy Prototype uses powerful beam attacks, grapples the party, and uses bursts of fire damage in melee range. It can pick a party member up in its hand, taking them out of battle for a time, and likely killing them unless the player manages to deal enough damage during the window for it to release them. Pride and Joy Prototype moves slowly and its different body parts are separately targetable. When it topples on the floor, the player can attack all its parts.

The Pride and Joy Prototype is weak to

Wind, using some fire attacks itself. Its jammer attack inflicts those it hits with various status ailments. It targets the character the player is controlling, incentivizing quick character-swapping. The boss's beam cannon has great range but narrow area of effect, and can be avoided by moving to the side from its range; if it hits, it will do severe damage even when blocking.

It is important to switch between characters often, having one character (Cloud with Counterstance, or Barret) take the heat, then switch to another character to attack it from behind (Tifa, or Cloud depending on party composition and the boss's current target), taking advantage of its slow movement speed and how most of its attacks target the front of the robot; this way the party can get in some attacks raise their ATB. When the boss raises its arms, it will use an attack that damages even those behind it, but the player can dodge-roll or run away, or simply absorb the attack as it is not one of the stronger ones. When it charges for the Beam Cannon, the player can easily move behind the boss.

Elemental Materia on melee attackers' armor, they will be healed when the boss uses its fire attacks if the elemental materia is maxed out. This set-up is also useful in the previous round against Bahamut and Ifrit. If the party does not have fire protection, avoiding the pools of fire is needed; the player can move further away and use ranged attacks and magic. Stacking the party with

HP Up Materia helps, and is likely needed to survive the previous round in the gauntlet.

Magnify Materia can be paired with

Revival Materia is good to have on two party members.

Haste is a good buffing spell to use.

If Aerith is in the party, she can use Arcane Ward from a safe distance and cast

Thundaga to deal considerable damage. She can pair her

Magic Up Materia and/or

MP Up Materia. If any other characters have lightning, they can also join her on the ward, though it is better to keep the boss's focus off Aerith so she can cast without interruption. When she runs low on MP she can use Soul Drain to replenish.

Pride and Joy Prototype is simpler to defeat than Bahamut, but is again a battle of endurance. It is best to prioritize having high HP over dealing damage and unleash all attacks in stagger: Cloud can raise ATB while in Punisher Mode, holding down

Berserk and then using Infinity's End; Tifa can raise the boss's stagger bonus damage with

attacks and True Strike; Aerith can hit it with Thundaga, preferably from an Arcane Ward, or use Ray of Judgment; Barret can use Maximum Fury with a full ATB gauge. When the boss staggers is also a good time to use any offensive limit breaks; Cloud can again gain Berserk from Punisher Mode to boost his limit break damage and Tifa can do Starshower first to boost hers—Tifa's Dolphin Flurry is especially potent. 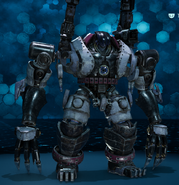