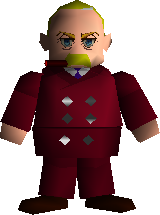 President Shinra is a short stout man with thinning blond hair and mustache. He wears a burgundy suit, white shirt and purple tie and carries a cigar. In the Remake, his suit and tie are lined with black stripes and white dots respectively, and he is thinner than his original depiction. In the remake, he has a gold colored Shinra handgun model

that he keeps in the drawer of his desk in his office.

President Shinra is an overly ambitious, greedy man, stopping at nothing to gain more money and power. Both callous and ruthless, President Shinra is unfazed at disposing anyone who might oppose him and his company. As the de facto ruler of the world, he exercises his power with impunity. His lifelong dream is to build Neo Midgar in the promised land, a place he believes is fertile with mako energy. His only soft spot appears to be his son, Rufus, whose traitorous behavior he forgives. Even his passkey at the Shinra Building is his son's birthday.[3] In the remake, he has a museum dedicated to his life in the Shinra Building complete with a gold colored statue, highlighting his obsession with wealth and power.

Before Final Fantasy VII Remake, the president was depicted ruling over Midgar and the rest of the Shinra-occupied world via handouts and misinformation. He promoted a prosperous future to garner more capital by putting spin on the narrative fed to the masses, showcasing a capricious and manipulative personality. In the Remake, his mindset on ruling the world better aligns with his son's: using his company's power to amass influence for egotistic reasons to dominate everyone under Shinra's survey with intimidation.

He has displayed frightening levels of sociopathy, callously having an entire sector destroyed to terminate his enemies, causing thousands of deaths. In the Remake he is openly unconcerned with the consequences, scoffing at Reeve's pleas to evacuate the area, viewing the populace's demise as a necessary sacrifice to weaponize the calamity for propaganda purposes. Afterward he is uninterested on restoring the sector, believing his Neo Midgar project to be more important and symbolic to his dreams of supremacy.

During the Hoshi o Meguru Otome novel, he is unable to return to the lifestream because he is too attached to his political and economical grandeur. He implies that he was willing to supply Aerith with prestige had she joined him in life and has little hostility towards her.

President Shinra has three known sons: Lazard Deusericus, Evan Townshend, and Rufus Shinra, but he only acknowledges the latter. Lazard and Rufus were given top positions in his organization, the Shinra Electric Power Company that has a monopoly on power generation in the world. Shinra started as a weapons manufacturer, and continues in the business with a private army it uses to conquer areas that reject Shinra's hegemony. In Final Fantasy VII Remake, the Shinra Building tour has a museum dedicated to the life of President Shinra that shows him building up the company in his younger years. As revealed in Dirge of Cerberus, motivated by the growing sentiment against his company during Midgar’s war with Wutai, President Shinra secretly commissioned Shinra’s Deepground facility to conduct human experimentation and create an army of remorseless and obedient super soldiers to eventually replace SOLDIER.

The traitor within Shinra[]

In Before Crisis -Final Fantasy VII- President Shinra gives a speech at Junon which was interrupted by an attack from the eco-terrorist group Avalanche, surviving being shot by its member Fuhito as he assigns the premier SOLDIER member Sephiroth to attack the Avalanche commander Elfe in retaliation. President Shinra begins suspecting the attempt on his life was made possible by a traitor within his company, wrongfully accusing the Turks’ leader Verdot and temporary replaces him with Heidegger to oversee the elimination of Avalanche in Junon. But Heidegger’s strategy nearly destroys Junon as the president is forced to rehire Verdot, who uses classified information to extort President Shinra.

President Shinra later discovers that Rufus orchestrated the attempted assassination to gain control of his father’s company, with the Turks taking Rufus captive as leverage with President Shinra to save their commander Verdot and Elfe, revealed to be Verdot's daughter. President Shinra later has Rufus placed under house-arrest in Junon, covering up his son’s absence by claiming he is on an "extended assignment overseas".

When the second generation of Avalanche attacks Mako Reactor 1 in Final Fantasy VII Remake, President Shinra is observing them via security cameras and triggers the reactor's self-destruction when the terrorists' explosive fails. President Shinra intends to denounce Avalanche as Wutai funded terrorists to make the public fear both Avalanche and Wutai and turn to Shinra. During Avalanche's bombing on Mako Reactor 5, the president addresses Cloud's party before setting airbuster on him and his friends. The President later has Sector 7 destroyed as a means of disposing of Avalanche.

During the Shinra Building infiltration, Avalanche eavesdrops on the directors' meeting where President Shinra explains his intent of not rebuilding Sector 7 as they now have an Ancient who can lead them to the promised land so he can realize the Neo Midgar project. He then gives Professor Hojo clearance to do as he pleases with Aerith as long as he provides results.

Though surviving being dangled from the roof (top), the president is killed by Sephiroth (bottom).

In the original game, the party meets the President again in person when they are brought before him after being captured while trying to escape with Aerith and has them locked in cells following a brief conversation. After finding their cell doors open, the group hunts down the President only to find him dead in his office with a nodachi embedded in his back as a Shinra executive named Palmer reveals that Sephiroth killed the President. In Final Fantasy VII Remake, the President escaped Sephiroth's initial attack, and was left hanging for dear life on the side of the Shinra Building when found by Avalanche. Barret manhandles him while determined to have him publicly confess for causing the Sector 7 incident and denounce the Wutai-Avalanche connection as Shinra's propaganda. The President holds Barret at gunpoint while voicing his lack of remorse or morality, scoffing that Barret's conviction to "save the planet" from Shinra is weak if he is only asking him to clear Avalanche's name over stopping all mako production. President Shinra is killed when Sephiroth stabs him from behind. Following the president’s death, his son Rufus assumes control of the company.

Found in the lifestream[]

In the novel Hoshi o Meguru Otome, Aerith's spirit in the afterlife finds a blank place in the lifestream where it does not flow properly, and discovers President Shinra. The President's spirit is joyous to have met her and tells Aerith he would have given her a life of luxury if she had cooperated with Shinra instead of living in the slums. He tells her how he took Shinra to where it was and became a king over Midgar with his control over mako and the people's dependency on it, and asks Aerith if she does not consider her life miserable in comparison to his as they have both ended up to the same place. Aerith realizes the President is clinging to the ambitions and wealth he had in life and this is why the lifestream cannot take him. Sensing her pity, the President tells her to leave. The moment she turns her back Sephiroth starts absorbing more essence of the planet to increase his power. The President is sucked in screaming as he is absorbed by Sephiroth.

The appearances of President Shinra are accompanied by the "Shinra Inc." theme.

During the scene when Sector 7 is destroyed, President Shinra observes the events from his office and the music he is listening to is Joseph Haydn's "The Creation".

President Shinra in his office at the Shinra Building.

President Shinra in his office in Final Fantasy VII Remake.

The president appearing as a hologram to the party.

Holding a cigar during a meeting.

The President hanging from the Shinra Building.

Golden statue of the president.

Following Rufus's ascension his title is shachō (社長?, lit. company president), while the English term (プレジデント, Purejidento?) is only ever used for his father. The game appears to avoid using shachō in reference to President Shinra, however this is given as his position within the Shinra Company in charts[5] and character profiles[6]. It is possible that "President" (プレジデント, Purejidento?) is actually his first name, however this seems unlikely as his subordinates refer to him solely by this name (while Rufus is never referred to without title). This means that he is the only character in the game referred to only by their surname. He is the only character whose speaker line contains their surname. In one instance of dialogue (corrected for the PC versions) his dialogue box reads only his surname.

The English term "president" (プレジデント, purejidento?) is likely used for his title as it can refer to both a company president and a head of state.

[view · edit · purge]In a March 4, 2020 interview, Yoshinori Kitase explained that the word "SHINRA" derives from the word "myth" in Japanese (神話, shinwa?) because SHINRA was about becoming god and controlling everything.