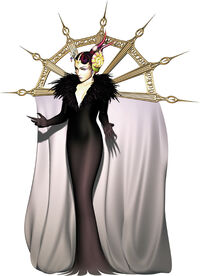 "Premonition" is a battle theme from Final Fantasy VIII. It was composed by Nobuo Uematsu. It shares much of the same central melody as the game's opening theme, "Liberi Fatali". It also features a reference to the main theme of Final Fantasy VII, the first five notes of that theme are repeated twice in the opening section.

"Premonition" was released as the fourteenth track of the second disc of the Final Fantasy VIII: Original Soundtrack album.

"Premonition" plays in the music player after the player buys the Memories of FFVIII soundtrack from Hammerhead for 100 gil.

The original version of "Premonition" makes an appearance as a bonus battle theme. It can be bought from the PP Catalog with 240 PP. It was included in the Dissidia 012 Final Fantasy Original Soundtrack album as the thirty-fifth track of the album's first disc.

Once purchased "Premonition" may be automatically selected as the battle theme for battles including Squall Leonhart, Ultimecia or Laguna Loire, or taking place at Ultimecia Castle.

"Premonition" appears as a Battle Music Sequence. It is available as DLC.

"Premonition" was arranged by Yuzo Takahashi and is present as "Mysterious Black Mage". This track was not included in the soundtrack release.

"Premonition" was rearranged in a hard-rock style and included in the Black Mages' third studio album. It is the album's seventh track.

The word "premonition" means "foreboding" or "forewarning". In parapsychology, premonition or precognition, is a type of extrasensory perception that would involve the acquisition or effect of future information that cannot be deduced from presently available and normally acquired sense-based information or laws of physics and/or nature.