Start a Wiki
watch 01:23
How to Obtain Tifa's Premium Heart in 'Final Fantasy 7'
Do you like this video?

The gloves of a champion from another world. The higher one's AP, the greater the damage.

Premium Heart (プレミアムハート, Puremiamu Hāto?) is the ultimate Knuckles weapon originating in Final Fantasy VII as a weapon for Tifa Lockhart. In Dissidia 012 Final Fantasy, Premium Heart is also the weapon that she wields in her EX Mode.

Premium Heart is the ultimate weapon for Tifa and can be obtained by examining a machine in the abandoned building that has a sign "ITEM" outside in Wall Market. It can be obtained after the player has found the Key to Sector 5 buried in Bone Village after Highwind is available. It has 99 points in Attack Power, 112% of Attack Accuracy, provides 32 points in Magic, has eight Materia slots linked in pair, and can be sold for 1 gil. It deals more damage the fuller Tifa's Limit meter is. Because of this its damage can be volatile, and Tifa's other weapons, such as the Godhand with its perfect hit rate, can be considered superior.

The damage that is dealt by Premium Heart is calculated as follows:

The maximum Limit Bar Units is 255 regardless of Limit level (the Limit level simply adjusts the rate at which the bar fills). When the bar is full, the weapon does roughly 1-4x of its normal damage depending on the Limit level, and would do 1/16 of that damage when the Limit bar is empty. Unlike most weapon damage modifiers, this modifier doesn't solely adjust the weapon's attack power, but the character's final attack power, which includes Tifa's Strength and weapon attack bonus.

There may be a bug with the formula as the way it is written, the "1" value has almost no effect. If the formula was instead : $ Power = 1 + [ (Tifa's Limit Level * Limit Bar Units / 16 / 16 ] $, the weapon would do 1x its normal damage when the Limit bar is empty and up to 5x damage with a full level 4 Limit gauge. The actual formula causes Tifa to do less than normal damage unless her Limit bar is at least 1/4th full at Limit level 4, which many players consider worse than a non-ultimate weapon.

Tifa used the Dissidia 012 Final Fantasy version of Premium Heart, with the Kingdom Hearts logo on it, during her assist Limit Break, Final Heaven.

Premium Heart is part of the grappling set. It boosts starting Bravery by 81 and Attack by 67, while also increasing Chase Bravery damage by 50%. It can be equipped from level 99, initially by Firion, Bartz, Tidus, and Jecht, as well as characters with Equip Grappling Weapons assigned to them.

Tifa's EX Mode is "Equipped Premium Heart" where she trades her Leather Gloves for Premium Heart. It gives her the "Premium Heart" effect, meaning the more EX Force she has accumulated, the more damage she deals. The Premium Heart has the heart from the Kingdom Hearts logo on them.

With the inclusion of Tifa, Premium Heart became a weapon exclusive to her available to be equipped at minimum level of 90. It reduces her HP by 522 points, and increases starting Bravery by 69 points, Attack by 73, and Damage by 7%. To obtain it, the player must trade 158,000 gil, Godhand, Electrum x1, and Brawler's Dream x5.

Premium Heart appears as a weapon.

Strong emotions enhance these knuckles. The owner sure has someone she'd love to hit.

Premium Heart grants +10 to Attack. It can be equipped by Monk, Tifa, Red XIII, Snow, and Chocobo. 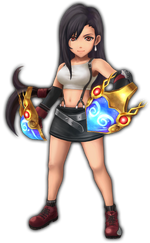 Tifa wields the Premium Heart knuckles, retaining the Kingdom Hearts logo as seen in Dissidia 012 Final Fantasy. Because of the game's cartoon-like art style, they appear bigger on her than in other depictions. They also appear more elaborately decorated.

Powerful fists from another world. A female fighter is said to have used the Premium Heart in order to protect the planet. She obtained this weapon from an item shop in the slums—an area that has never seen the light of the sun.

Premium Heart is a Fist weapon obtained as Tifa's STMR. It provides 170 ATK and increases the user's Limit Burst gauge by 3 every turn.

Has the heart of a virgin.

The Premium Heart appears as a 2-handed knuckle within the Forsaken Dungeon. It provides 87 Weapon Atk, 4 Durability, +8 Magic Def, -3 Speed, and -3 Consumption Rate.