Cid Pollendina: Oh, shut up and help me remodel the Pravoka page!
Please expand this article into a full one. The following tasks need to be completed:This request can be discussed on the associated discussion page. Remove this notice upon completion.

Pravoka is a town in the original Final Fantasy. It is called Pravoca in Final Fantasy Origins. It is located east of Cornelia, and contains a dock. The town is invaded by pirates, but the pirates are driven off by the Warriors of Light. They are then given the pirate ship by the captain, Bikke, who promises not to cause any more trouble.

The background music that plays in Pravoka is Final Fantasy's "Town" theme.

Pravoka appears as ruins on the game's world map, at the Cornelia Plains. In the Confessions of the Creator Scenario, a Teleport Stone can be found near it, and in some chapters a Moogle Shop operates here. A gateway, fittingly called Pravoka Gateway, is located in the same region.

Pravoka Region is a place in Final Fantasy Airborne Brigade. 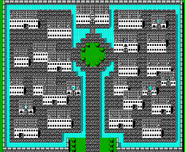 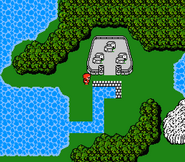 Pravoka on the World Map (NES).

Pravoka on the World Map (PS).

Bikke and his pirates (GBA).

Bikke and his pirates (PSP).

The town of Pravoka (GBA).

Pravoka in the World Map (GBA).