What a delightful surprise! You've come all this way to hear me perform? Why thank you!
I am Praline à la Mode. Prepare to be dazzled! Love in the Crossfire!

Praline à la Mode, known as Prin à la Mode in Japan and styled as the Diva of the Battlefield, is a non-playable character from Bravely Default, Bravely Default: Praying Brage, and Bravely Second: End Layer. She is a member of the Black Blades and keeper of the Performer asterisk.

Stationed at Eisen Bridge, where the Shieldbearers and Swordbearers are locked in battle. She uses song to bolster her fan club.

A 17-year-old girl from Florem. She goes by the name Praline à la Mode, and carries the performer asterisk. She is a battlefield diva, and tends to adlib her way through life without thinking too much.

Praline is a young woman with long, wavy blonde hair and green eyes. She wears a blue dress with a white corset-like middle and blue puffy sleeves. The skirt flares out and has a white ruffle rim. She has a blue bow around her neck and blue earrings. She has knee-length white platform boots with blue bows down the front and white elbow-length gloves. She sports a blue and white headband that sticks up like rabbit ears, and wields a white and pink rod in the form of a handheld microphone called the Superstar's Mic.

Praline's age is stated to be 17 in Bravely Default, although by the events of Bravely Second, her entry in Yew's diary still describes her as 17 years old. The main characters suggest Praline has been lying about her age to maintain her diva image.

Befitting her title the diva, Praline wishes nothing more than to be the center of attention, the reason she joined the Black Blades since the war gave her the perfect stage to be heard. Praline considers herself the most hardworking of the group, which puts her at odds with Barbarossa, as she insults his role in the Black Blades. Taking pride on her singing skills—though people consider her voice annoying—she claims that even her enemies challenge her to listen to her songs, arrogantly dismissing remarks to the contrary. Being mostly a support unit rather than a fighter, and combined with her much earned praise, she prefers to let her "darlings" do the fighting for her, knowing her "fans" would put their lives at risk for her.

Whenever her songs are interrupted, or her pride tarnished, she can lose her temper and composure, throwing a childish complaint if she cannot sing louder or use her "fans" to beat up her opposition. She expresses a distaste for music before her generation, believing that upgrading it into a pop song is more important than honoring the original intent of the composer. Despite being spoiled and self-centered, Praline is not truly heartless, as later on she is not supportive of Khamer's plan to use her as a means to pacify the people who would be forced into extreme labor, and only agrees to do so thinking it is under Kamiizumi's orders.

Born in Florem, Praline became a member of the Black Blades and uses her skills to rally her fan-base among the Swordbearers at the siege of the Eisenberg bridge. The party first encounters Praline upon arriving at the bridge, wherein the young woman starts encouraging a formidable force of soldiers with "Love in the Crossfire". Ringabel remarks upon her ability, citing the voice as enchanting with Edea sternly pointing out the effect of confusion it can give to a foe. Following their battle, Praline begins a last stand with the party realizing they need to retreat lest they face total annihilation. Frustrated by the endurance of those enchanted under Praline's songs, the party decides to look for an alternative mean of defeating the plucky songstress.

The party arrives at the tavern of the Grandship where the proprietress of the tavern indulges them with a tale about a Siren. Edea remarks that it's a common tale, wherein the siren lures a group of seamen to cast themselves into the sea. The proprietress mentions that the siren's song was once heard throughout the entirety of the Grandship, scaring young and old alike. It just so happened however, that a bard was aboard the ship and knew of a way to combat the menacing siren. He urged everyone on the ship to drown out her singing with their own, thus conducting a long-night display of singing to finally defeat the siren. The bard left the ship soon after, having been mentioned as heading to Ancheim to meet with a pupil. The party then decides to search for Arca Pella's pupils and find the baton to use against Praline.

Having retrieved the bard's baton, the party returns to the Eisen Bridge to do battle once more with a zealous Praline. As Praline begins to sing "Love in the Crossfire", Edea calls out to the Shieldbearers and induces them to sing by conducting with the baton. While in the midst of being drowned out, Praline attempts to sing even louder with little success. She then attempts to use cannonfire, but the attack does not harm the party. Frustrated by the party's interruption of her singing, she engages them in battle.

The party succeeds in defeating Praline and her bodyguards, with a dejected Praline stating that she only wanted her songs to be heard. Fazed by her loss, Praline decides to quit the Black Blades to pursue an ordinary life and runs back to Florem, much to the dismay of her fans.

Following her defeat in the Third World, Praline can be found performing at the tavern on Grandship at night. Her skill at singing and providing buffs is rumored to be the reason why the tavern's service has improved. In the Fourth World, Praline is abducted by Jackal as what the thief thought was a part of a scheme by Eloch Quentis Khamer VIII. At that time, due to her description of Nobutsuna Kamiizumi being similar to that of Ciggma Khint, Praline and Jackal thought they knew the same person which made them able to get along perfectly at the time. In the Fifth World, Praline is summoned to Eternian Central Command where she supports Hayreddin Barbarossa, Barras Lehr, and Alternis Dim as a member of Eternia's third line of defense.

Competing with her former teammate Barbarossa, Praline wants to reimagine an recently discovered composition by Arca Pellar and talked the composer's grandson Rocca into giving her the rights to it. When confronted over it by Edea and Yew's party, Praline is mortified by Edea calling her out for altering the song for her own fame rather than act on Arca's intentions.

If Yew's party decide to fight her, Praline uses her defeat as an excuse to advertise her upcoming appearance at Florem Square Garden before running off in tears when Tiz ruins her moment. However, if they decide to support her, she appears after Barbarossa is defeated where it is revealed that he didn't even listen to the arrangement and merely misjudged it. Praline then decides to perform it at the Square Garden and ends up being pleasing enough for Barbarossa and his crew to enjoy it, and thus let her have her way.

As a Performer, Praline uses support abilities that enhance the capabilities of her allies. She also has the ability to summon her Black Blade bodyguards in battle. She falls down to her knees when defeated.

Praline is fought as part of a sidequest. She uses support abilities that enhance the capabilities of her allies. She also has the ability to summon her bodyguard fans in battle.

Praline's theme in Bravely Default is "Love in the Crossfire" which plays during her cutscenes, singing the lyrics to booster her fans.

In Bravely Second, Praline theme is "Performer Praline's Grand Ship - God Arrangement" which plays during her cutscenes and battle.

"Love in the Crossfire" lyricsEdit

Praline is voiced by Stephanie Sheh in the English release. She shares her voice actress with Airy and Airy's sister in Bravely Default.

She is voiced by Fumie Mizusawa in the Japanese version. She shares her voice actress with Egil. 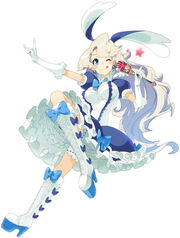 Praline appears as a light-elemental summon. She is a limited edition cameo summon as part of the Bravely Archive collaboration event.

Her special attack is Love in the Crossfire, which deals light-elemental damage to all enemies and lowers their attack, magic, and speed for two turns. Summoning Praline costs 2 points from the Consumption Gauge. All versions of Praline are able to go up to rank 7.

Praline allows the wielder to use the following abilities:

Her Signet artwork is her official artwork from Bravely Archive.

Praline appears as an obtainable unit.

Praline appears as an obtainable unit alongside her fellow idols of Pretty Cakes.

Praline appears as an obtainable character.

Praline appears on a sticker set for the LINE communications app. The sticker set she appears in is titled "Bravely Stickers - Volume 2".[2]

[view · edit · purge]À la Mode is a French saying that means according to the fashion, but it can also mean fashionable in style or design. À la Mode comes to mean a dessert served with a side of ice cream in American tradition.

Her Japanese name is Prin (as it appears in her minions in Bravely Second and their entry in the artbook), which in Japanese katakana is written the same way as Purin. [view · edit · purge]Purin (プリン?) is the Japanese word which refers to pudding, custard, or crème caramel.