Praline à la Mode is a summon in Final Fantasy Dimensions II. She is originates as a character from the Bravely series. Praline appears as a light-elemental summon. She is a limited edition cameo summon as part of the Bravely Archive collaboration event.

Her special attack is Love in the Crossfire, which deals light-elemental damage to all enemies and lowers their attack, magic, and speed for two turns. Summoning Praline costs 2 points from the Consumption Gauge. All versions of Praline are able to go up to rank 7.

Praline allows the wielder to use the following abilities:

Her Signet artwork is her official artwork from Bravely Archive. 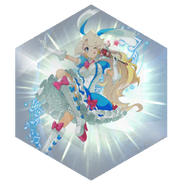 Rank 6 Signet.
Add a photo to this gallery

[view · edit · purge]À la Mode is a French saying that means according to the fashion, but it can also mean fashionable in style or design. À la Mode comes to mean a dessert served with a side of ice cream in American tradition.

Her Japanese name is Prin (as it appears in her minions in Bravely Second and their entry in the artbook), which in Japanese katakana is written the same way as Purin. [view · edit · purge]Purin (プリン?) is the Japanese word which refers to pudding, custard, or crème caramel.