A vest woven with a unique thread.

The Power Vest is an high-rank clothing that grants the wearer a great boost of 15 Strength, as well as a bonus of 1 to Agility and Stamina. It can be found in the Lifespring Grotto.

A vest that enhances strength.

The Power Vest provides 25 Defense, -5% Evasion, 5% Magic Defense, and +10 Strength. It is found in a treasure in Leviathan and is dropped by Dark Behemoth, King Behemoth, and Malboro Menace.

Sash made from special threads.

The Power Sash is a powerful piece of clothing dropped by Behemoths and King Behemoths. It grants the wearer +15 to Strength and has 15 Defense. In the 3D version it also gives 10 to Evasion.

Power Sash can be equipped by every characters, and initially equipped on Cid. It has a defense of 15 with a bonus of +15 Strength.

The Power Sash is an armor that provides +15 Defense and +15 Strength. It is dropped by Behemoth.

The Power Sash grants a moderate boost to Strength. It can be bought in Surgate Castle and Quelb for 4,500 gil and dropped from Yojimbo. It has 11 Defense and 4 Weight. The Power Sash can be equipped by Knights, Monks, Thieves, Dragoons, Ninjas, Samurais, Berserkers, Rangers, Mystic Knights, Blue Mages, Red Mages, Beastmasters, Chemists, Dancers, Cannoneers, Gladiators and Mimes.

Sash that strengthens the wearer.

The Power Sash is a strong armor that slightly increases Strength, Stamina, and Speed upon being equipped. It can be purchased at Narshe, Thamasa, Tzen and Nikeah for 5,000 gil. It has 52 Defense and 35 Magic Defense and can be equipped by Locke, Sabin, Shadow, Cyan and Gau.

The Power Vest raises Strength by 2 and Defense by 27. The abilities it teaches are Counter, Gamble Defense, and Stone Killer. Zidane, Vivi, Dagger, Amarant, Quina, and Eiko can equip it. It can be bought at Esto Gaza and Ipsen's Castle for 7,200 gil, found in Oeilvert and stolen from Ark.

The Power Vest is a high-ranking light armor. In the original version, it can be equipped after obtaining the Light Armor 8 license. It provides +400 HP, +34 Defense, and +2 Magick Power. It can be purchased in Archades and Balfonheim Port for 8,100 gil.

In the Zodiac versions, it provides 41 Defense, +400 HP, +2 Magick Power, and requires the Light Armor 8 license for 60 LP. It can be bought in Balfonheim Port for 8,100 gil, found as a treasure in the Feywood (Ice Field of Clearsight) and Necrohol of Nabudis (Hall of Slumbering Might), stolen from Tartarus (3% chance), and is made in the bazaar for 7,980 gil after selling Quality Pelt x6, Tanned Giantskin x4, and Fire Crystal x3. It can be equipped by the Machinist, Monk, Archer and Shikari.

The Power Vest is one of Vaan's chestplates. It is resistant to Lightning attacks. It is reward for completing mission 7-2. It can also be bought in Chapter 8 for 12,000 gil. It gives 63 Defense and 42 Magick Defense.

A supportive garment that enhances the wearer's fighting capabilities.

The Power Garb (Power Sleeve on the PlayStation) boosts Physical Attack by 2 and HP by 70. It can be bought for 7,000 gil after storyline battle 26 and found as a rare treasure at Finnath Creek with the Treasure Hunter ability.

The Power Sash teaches Return Fire to Jugglers and Assassins, and provides +2 Attack, +34 Defense, and +10 Resistance. It can be bought for 7000 gil in the shop after the second shop upgrade.

This handy accoutrement is meant to take the slack out of clothing to prevent unwanted snags and tears.

The Power Sash teaches the Return Fire ability and provides +4 Attack, +34 Defense, and +10 Resistance. It can be equipped by all jobs excluding Dragoon, Paladin, Moogle Knight, Templar, and Defender, and can be bought for 1500 gil in the shop after creating it in the Bazaar after using a Mysidia Alloy, Onion, and Giant's Tanned Hide.

Heavy Armband is an artifact that gives Strength +3.

Power Vest is a level 48 clothing that provides +1,439 HP as well as defense against stage elements by 25%. It can be traded for at the shop for 11,240 gil, a Kenpo Gi, Giant Feather, and Transmogridust.

Humans have been known to carry out incredible feats of strength when faced with great peril. Some say that most of them do not even use most of their real strength on a daily basis. The power vest, a piece of equipment loved by martial artists, stirs the fighting spirit and helps the wearer unleash the physical strength dormant within his or her body. Though it may look like it is made form a simple cord at first glance, the power vest not only helps to push the limits of the human body, but offers a great amount of protection as well.

Power Vest is a clothes that provides 5 ATK and 18 DEF. It can be crafted using 600 gil, x1 Fire Megacryst, x3 Rockbeetle Husks, and x1 Silver Ore, and found during the exploration of Mobreeze Airship Factory.

A mysterious sash from the land of Wa, an island nation that vanished centuries ago.it was used to tie loose sleeves so they would not be a hindrance in battle. It bestows demon-like strength when tied in a special manner. 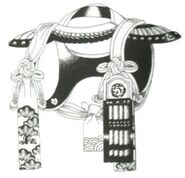 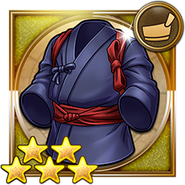 While mentioned as a vest, a tatsuki is a traditional Japanese accoutrement for martial arts, and especially for samurai. Slung around the back of the wearer, the crossed arrangement of the cloth allowed long and hanging sleeves to be pulled and tied back for greater mobility and clearing them when wielding weapons such as spears and swords, as the sleeves would catch through the moving pommel and handle without it.