A Mirage with the compassion to help friends and the courage to overcome enemies. And a fast runner to boot. Don't mention the U word though...that's not a horn.

In the Ice Region, just before entering Saronia, is a Murkrift housing two Poninis. After defeating or imprisming them, they can be fought again at the Coliseum, in the "Nice Horsie" match. 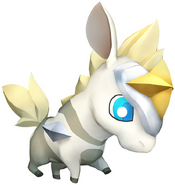 "Ponini" may be derived from "pony".