Poisona (ポイゾナ, Poizona?), also known as Antdot, Antidot, Pure, Esuna, or Panacea, is a White Magic spell that appears in various games in the series. It cures the Poison status.

Despite using the name Pancaea in their respective localizations, the enemy ability known as Pancaea in Final Fantasy IV and the recurring mix from the Final Fantasy X series are seperate abilities in the original Japanese - the former being the recurring Treatment ability, while the latter mixes are known as All Cure (オールキュアー, Ōru Kyuā?)

Poisona (PURE on the NES and Esuna in Final Fantasy Origins) is a level 4 White Magic spell which removes the Poison status effect from a single ally.

The spell can be bought at Elfheim and can be learned by the White Mage and Red Mage, and their upgrades. In the GBA/PSP/iOS releases it costs 3 MP to cast.

Poisona (also called Pure) is a level 1 White Magic spell, and is the first purchasable spell, bought in Ur for 100 gil. It is the spell behind the Antidote item, and has a 50% Accuracy.

Poisona is a spell used when a character uses a Staff as an item, which removes Poison from one target. The spell is classified as a white magic spell in the 3D remake.

This section about a spell in Final Fantasy IV: The After Years is empty or needs to be expanded. You can help the Final Fantasy Wiki by expanding it.

Poisona (also called Antidot) is a level 1 White Magic spell and costs 2 MP to cast. It can be bought in Tule, Carwen, Karnak, and Jachol for 90 gil. It is one of the spells that can be cast from the Wonder Wand for free.

Poisona (also called Antdot) is a Healing spell that can be learned naturally by both Terra and Celes (Terra at Level 6 and Celes at Level 8), and Kirin teaches the spell at a rate of x4. It costs 3 MP to cast and is vulnerable to Runic. In addition to curing Poison, the spell also cures the sap status as well.

Poisona is obtained by equipping a Heal Materia. It costs 3 MP to cast. The enemies Toxic Frog and Jemnezmy have access to the spell, though Jemnezmy uses the spell as a counter on opponents that are under Poison, while Toxic Frog can only use the spell while under Manipulate.

Poisona is the first ability of

Cleansing Materia, costing 3 MP to cast. It cures one party member of the Poison status.

Panacea is a White Magic spell learned by Dagger and Eiko through the Air Racket and Rod for 15 AP. Panacea cures Venom and Poison from one target. It costs 4 MP to cast. It can be reflected and works with Return Magic.

Poisona is a low-level WHM spell. Scholars can also cast it via Addendum: White.

Poisona can be used with the White Magick 2 license, both in the original version and Zodiac versions—in which it can be learned by the job classes White Mage and Red Battlemage, though a Red Battlemage must obtain the Quickening license first. In the original version it is available early, from the Nalbina Fortress market, from Rabanastre after Penelo first leaves the party, and from Barheim Passage. In the Zodiac versions, it is available from shops after the party returns from Barheim Passage. It is also a Diamond Armlet treasure in Stage 25 of the Trial Mode, and a spell known by Larsa when he joins as a guest.

Esuna is a spell learned by all healer jobs that removes a single debuff from the target.

Poisona is a White Magic ability with a Rarity of ☆. It removes Poison from one target, it can initially be used four times and it can be honed to Rank 5. It can be created by using Minor White Orb x3, Minor Dark Orb x3, and 1000 gil.

In Bravely Default, Poisona is a level 1 White Magic. It cures poison for one target. It costs 4 MP to use. It can be bought in Caldisla, Yulyana Woods Needleworks, and Miasma Woods for 200 pg. 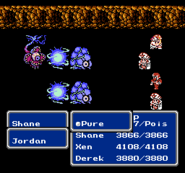 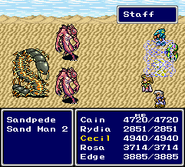 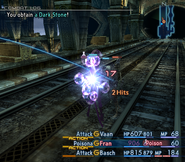 The spell has also been localized as "Panacea". [view · edit · purge]The panacea, named after the Greek goddess of universal remedy, was supposed to be a cure to all diseases and prolong life indefinitely.