Poison Touch (ポイズンタッチ, Poizun Tacchi?), also known as Poisontouch, Poison-touch, Bane Touch, or P-Skin, is a recurring ability in the series. It often is a non-elemental physical attack that inflicts the Poison status to one target.

Poison Touch is an ability usable by Trillium and Paraladia, and simply inflicts the Poison status.

Poison Touch is an ability usable by Ornitholestes, which reduces the target's HP by 75% and Poison to one target, has a power of 12, and a 100% Petrify Destruction Rate.

Poison Touch is an ability usable by Ghoul, Specter, Wraith, and Zombie, which inflicts non-elemental physical damage and Poison to one target.

Poison-touch is an ability usable by Mad Toad, Gidrah, and Chimera, which counters physical attacks by inflicting the Poison status to the attacker.

P-Skin is an ability that has 30 uses, it also increases a Robot's HP by 9. The user waits for a physical attack and if attacked, inflicts Pois on the attacker. This ability can be used by Ghast, P-Toad, P-Worm, and Pudding.

P-Skin is an enemy ability that automatically counterattacks by inflicting the Pois status on the attacker. It is used by BlackCat, Brooder, Big Head, and Dagon. 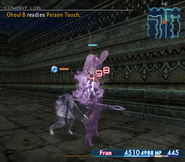