Poison Mist (ポイズンミスト, Poizun Misuto?), also known as Gas, is a recurring ability in the series. Most often used by enemies, but sometimes available to the player, it oftentimes inflicts Poison as well as non-elemental or Poison-elemental damage to the entire party.

Poison Mist is an ability used through the Gaia command while either on Swampland or in the Pyramid of Moore, and deals unblockable Poison-elemental damage to all enemies as well as a 99% chance of inflicting the Poison status.

Poison Mist is an ability used by Anacondaur, which inflicts non-elemental damage and Poison to one party member. It is only used when the user Anacondaur's HP is below 50% of their Max HP.

Gas is an ability that has 10 uses and has an attack power of 4 which damages one enemy, the damage formula is base on Mana. This ability is used by Gen-Bu, Clayman, Hydra, Scorpion, Squid, Tiamat, Kraken, Pudding, Basilisk, Ganesha, Hi-Slime, Ironman, and Gen-Bu2. 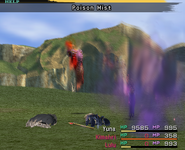 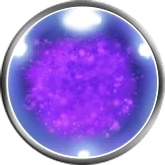