For those whom nature has not blessed with venom, there are these. Small thorns deliver the goods.

The similarly named weapon, Venom Claws/Poison Claw from Final Fantasy VI, is actually a Darksteel Claws by its original name.

Hell Claws (Poison Claw for the Easy Type version) is weapon for Yang, that provides 40 Accuracy, and a 30% chance to inflict Poison when attacking with it.

The Poison Knuckles is a low-ranked weapon for Amarant that teaches Spare Change and Counter. It has an Attack of 33 and inflicts Poison when used with Add Status (40%). It can be bought for 5,000 gil in Conde Petie, Madain Sari, Alexandria, Treno, Lindblum, and Ipsen's Castle, and is stolen from Scarlet Hair.

Poison Claw is a weapon for Rikku acquired if a claw's dominant ability is Poisontouch.

Poison claws jut from these knuckles.

Sick Knuckles is a low-ranked knuckle that provides +35 Attack and +1 Evasion, and teaches the ability Green Gear to the Gadgeteer. It can be bought for 1,000 gil.

Poison Knuckles is a low-ranked fist weapon that teaches Green Gear to the Tinker and Scream to the Berserker. It provides 33 Attack and 2 Evade, and can be bought for 600 gil in the shop after creating it in the Bazaar after using a Dark Stone, Xergis Tin, and Bat Tail.

Poison has a claw icon before its name. It has an attack power of 140 and can inflict poison when attacking. It can be bought for 18000 G at Cirrus in Pureland, it can also cast Venom when used as an item during battle.

Poison Knuckle is a low-level claw. It provides 26 attack power and can inflict Poison.

It's said poison is a woman's weapon, but don't tell that to any guys wearing these.

Poison Knuckles grants +1 to Attack. It can be equipped by Monk, Tifa, Red XIII, Snow, and Chocobo.

Among weapons which can be equipped to ones knuckles, claws are special for their cutting ability. One could even inflict their opponent with poison if it were to be applied to the tips of a set of claws. It was thanks for this idea that the poison knuckles were created. Though cherished by those who make their living carrying out assassinations, they are fiercely detested by fair-fighting martial artists who view their use as unfair.

Poison Knuckles is a Fist weapon obtained by crafting it using 200 gil, x5 Dark Megacrysts, and x10 Mythril Ores, and by finding it at Maranda Coast. It provides 40 ATK and has a 30% chance of inflicting Poison.

This section about equipment in Chocobo's Dungeon 2 is empty or needs to be expanded. You can help the Final Fantasy Wiki by expanding it.

A knuckle glove with hollow claws. Upon impact, it delivers poison to an opponent through its claws.

In Bravely Second: End Layer, Toxic Claws is a knuckle that provides 53 P.ATK, 90 Aim, 3 Critical, and deals 50% more damage to inorganic foes. It can be bought in Hartschild for 2200 pg. 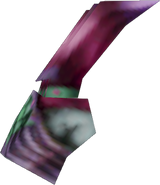 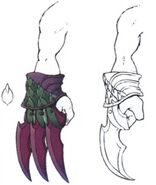 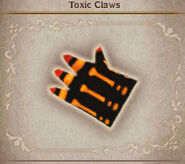 Poison Knuckles in Final Fantasy All the Bravest.

Venom Claws in Final Fantasy All the Bravest.