Axe that sometimes poisons enemies. Can be used two-handed.

The Poison Axe (ポイズンアクス, Poizun Akusi?), also known as Venom Axe, is a recurring weapon in the early series. It is usually a mid to high-ranked weapon that inflicts Poison on a target on hit.

An axe with a poison-dipped blade.

The Poison Axe is a high-ranked axe found in the Cyclone and is one of Leon's initial weapons. It has an Attack of 76, Accuracy of 55%, Evasion of 2%, and is Poison-elemental.

Poison Axe is a mid-ranked axe that only Paladin Cecil and Kain can use. It is found only in the Feymarch and inflicts Poison on hit. It has an Attack of 95 and Accuracy of 10. This weapon is metallic.

In the Easy Type version, it attack power was increased to 105 and hit rate to 40% and is now throwable.

In the 3D versions, Poison Axe has an attack power of 105 with an accuracy of 95 with the same properties as the 2D versions. It provides +7 Strength and Stamina, -4 Speed, Intellect, and Spirit and has a 30% chance of inflicting Poison when attacking. It deals extra damage against Giants.

The Poison Axe is a high-ranked axe providing 95 Attack, 10% Accuracy, and casts Poison when used as an item. It can be equipped by Cecil, Kain, Cid, Luca, Gekkou, and Golbez. It can be found in the Subterrane, and dropped by Armor Construct and Armored Fiend.

The Poison Axe is a mid-ranked axe used by Freelancers, Berserkers and Gladiators. It has an Attack of 45, is Poison-elemental, has a 67% chance to cast the Poison spell on hit. It can be bought in Surgate Castle for 9,600 gil, dropped from Bio Soldiers that are summoned by Zephyrus, or stolen from Reflect Knights. 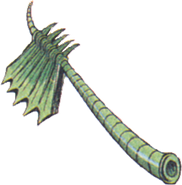 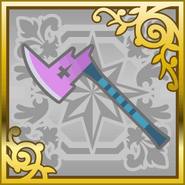 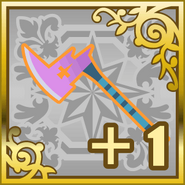 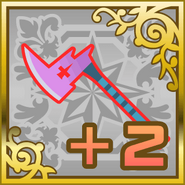 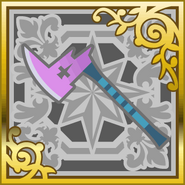 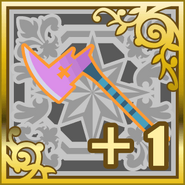 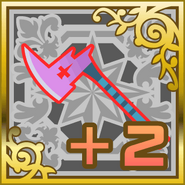 This gallery is incomplete and requires Final Fantasy V (iOS) added. You can help the Final Fantasy Wiki by uploading images.
Edged weapons
Community content is available under CC-BY-SA unless otherwise noted.
Advertisement