The PlayStation Vita was a handheld system manufactured by Sony Interactive Entertainment, and the successor to the PlayStation Portable, released in Winter 2012.

The Vita itself was officially discontinued in Spring 2019, with production having ceased four years earlier[1]. Sony cited a lack of interest in dedicated portable devices as users increasingly favor both iOS and Android as gaming platforms over the Vita[2]. Nevertheless, the handheld had developed something akin to a cult status, as third-party development of games for the system continued well into 2018. As of April 2021, PlayStation Network services remain operational for the handheld.

The Vita reached a circulation of about 18 million units, well above that of the Nintendo Wii U.

The following titles were available to use with the PlayStation Now streaming service until they were removed in October 2015. 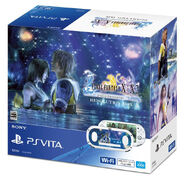 A downloadable code for the Heavensward PlayStation theme is included in the package.

Sony's advertisement for the Remote Play feature allowing Final Fantasy XIV: A Realm Reborn to be played on the PS Vita.