The PS2 is part of the sixth-generation era of video games, and has become the fastest selling gaming console in history, with over 100 million units shipped by November 2005, beating the previous record holder, the PlayStation, by three years and nine months. Overall, the system reached an installed base of more than 150 million units by its end-of-life.

The PlayStation 2 saw the greatest number of hardware changes for any console over a span of more than a decade, divided between five different case styles. When it was first released to the public in Japan, the so-called "fat" PS2 (SCPH-1xxxx) had two USB ports and a PC Card slot, which was used for connecting the PlayStation 2 Broadband Unit, a device that incorporated an external hard disk and network adapter for use with the console.

The second-revision models, also "fat" (SCPH-3xxxx), were released worldwide. These had the same USB ports as the 1xxxx series and added an i.Link (FireWire 400 4-pin) port, but in lieu of the PC Card slot was an internal expansion bay for an optional 40 GB hard disk and dual network adapter as well.

The third revision (SCPH-5xxxx) was also "fat". This series retained the expansion bay, but the FireWire was removed, adding instead a remote control sensor.

In 2004, Sony revealed a fourth, slimmer model (SCPH-7xxxx). This series reduced both the weight and the power requirements of the console and integrated the network adapter. However, it removed the expansion mechanism for a hard disk. This series also had an external power supply whose first runs were prone to malfunction and combustion, but this issue was eventually resolved with the fifth and final models (SCPH-9xxxx), where the power supply was again mounted inside the console. Consequently, only the first three series listed above were capable of running Final Fantasy XI. 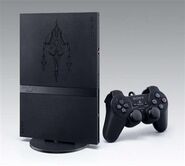