A shining sword made of a lustrous white alloy of mythril and platinum. Its broad blade is wickedly sharp.

Platinum Sword is a mid to high-ranked sword that provides 70 Attack, 5 Evade, 35 CT, and 5% Combo Rate. It requires the Swords 4 license to equip, and can be bought for 9,000 gil at Archades and Phon Coast, or by doing the "Conversations with Ktjn" sidequest.

In the Zodiac versions, it now provides 61 Attack, 5 Evade, 32 CT, 5% Combo Rate, and requires the Swords 6 license for 60 LP. it can be bought for 7,400 gil at Mt Bur-Omisace or Mosphoran Highwaste, found at Stilshrine of Miriam (Walk of Reason), dropped from Mandragora (1% chance), or stolen from Twintania (3% chance).

Platinum Sword is a high-ranked sword that provides 12 Attack and 10% Weapon Defense. It can be bought for 11,000 gil at an Outfitter after Walled City of Yardrow in Chapter 3 or as rare treasure in Mount Germinas.

A blade that gleams with a special light. Platinum is reserved only for the very best.

Platinum Edge is a mid to high-ranked sword that provides 104 Attack and has one available slot for jewels. It can be equipped by all races.

The Platinum Sword is one of Ramza's unlockable weapons. It can be obtained either by random chance when redeeming a Treasure token, or by purchasing it from the Shop for 7,200 Gil.

The Platinum Sword is also one of Vaan's unlockable weapons, based on its appearance in Final Fantasy XII. It can only be obtained by purchasing it as DLC from the Playstation Store.

Like all other characters' weapons, equipping either of these offers no advantages or disadvantages.

A sword boasting of incredibly high durability that radiates with a brilliant white sheen. Being both remarkably beautiful and useful, this sword is immensely popular with many. However, since platinum is far heavier than gold, equipping it adds a considerable amount of weight for the wielder to handle. Owning this blade is seen as proof of an experienced knight's growth through their hard training.

Platinum Sword is a Sword obtained by buying it for 10,000 gil at Ilteah Town, City of Trials Dendalio, and Town of Desolation Visectrum, and by finding it at Underworld Gaberada. It provides 51 ATK.

A sword made of platinum.

The Platinum Sword appears as a sword within the Forsaken Dungeon. It provides 73 Weapon Atk, 8 Durability, -3 Speed, and -2 Consumption Rate. 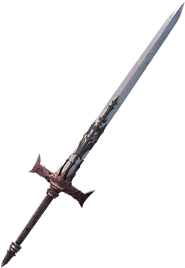