Platinum Rapiers (プラチナレイピア, Purachina Reipia?) is a recurring weapon in the series. It is part of platinum equipment, a recurring equipment type in the Final Fantasy series.

Platinum Rapiers is an early game weapon for Machina. Its Attack Power is 10 and it is bought from Rokol for 1600 gil. 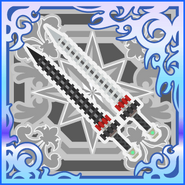