A knife with a blade made of a lustrous white alloy of mythril and platinum.

While not appearing at all, there is an unused concept art for a Platinum Dagger, indicating that it would have been in the game at one point.

Platinum Dagger is a high-ranked dagger that provides 66 Attack, 5 Evade, 23 CT, 7% Combo Rate, and inflicts Immobilize on hit with a 10% chance. It requires the Daggers 5 license to equip, and can be bought for 11,500 gil at Archades, found at Henne Mines (Phase 2 Dig), dropped from Shambling Corpse (1% chance), or from doing the Great Cockatrice Escape sidequest.

In the Zodiac versions, it now provides 83 Attack, 5 Evade, 21 CT, 12% Combo Rate, and inflicts Immobilize at a 10% chance and requires the Daggers 5 license for 60 LP. It can be bought for 13,700 gil at Balfonheim Port, stolen from Shambling Corpse (1% chance), doing the Great cockatrice escape sidequest, or found at Feywood (The Edge of Reason).

Platinum Dagger is a mid-ranked knife that provides 5 Attack and 10% Weapon Defense. It can be bought for 1,800 gil at an Outfitter after Zeirchele Falls in Chapter 2, or poached from Floating Eye and Malboro.

A relatively high-quality dagger that shines in a radiant white hue. Platinum is a material favored for weapon-making, as it can survive prolonged use without suffering any significant damage or deterioration. It is for this reason that this dagger is popular with so many people. Some leaders of bandit groups and other experienced thieves even give their own platinum daggers to their subordinates as a symbol of their graduation to a higher rank within the group. 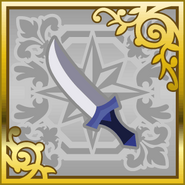 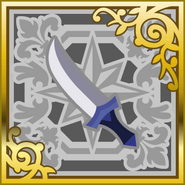