Entreat the planet's favor to nullify physical damage dealt to all party members.

Shield to the entire party, making them immune to physical damage for a duration of 80 seconds.

Planet's Protection grants Shield to the entire party for 80 seconds. Against bosses that deal physical damage, Planet's Protection can be extremely useful to not only provide immunity to damage, but also prevent party members from being interrupted by physical attacks. This has a greater effect than using

Barrier Materia, does not require

Magnify Materia, and has no ATB or MP cost.

Aerith benefits greatly from equipping the Spectral Cogwheel accessories to increase the limit gauge when she spends MP by casting spells, which Aerith will be doing frequently due to her role. Additionally, Gotterdammerung allows her to use it even more often, and open the battle with Planet's Protection.

Compared to Healing Wind, Planet's Protection can be more helpful overall. The main drawback is that it does not help against magic attacks, and that equipping it will cause the limit gauge to take longer to fill, reducing the value of

Refocus Materia for her. Because Aerith benefits greatly from Refocus, and Planet's Protection is situational, it is normally better to keep Aerith on Healing Wind except against bosses where physical damage immunity is crucial. 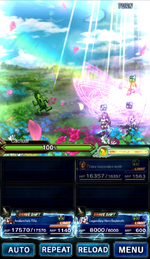