Cid Pollendina: Oh, shut up and help me remodel the Plaisir page!
Please expand this article into a full one. The following tasks need to be completed:This request can be discussed on the associated discussion page. Remove this notice upon completion.

Prismatic God of Wind and Delight

Wind
Plaisir is a non-playable character that appears during the "Eureka" arc of Final Fantasy Dimensions II. He is the mischievous Prismatic God of Wind and Delight from the land of Eureka. He serves as a minor antagonist during the events of the arc.

When not in battle, Plaisir is often seen as a small green canine-like creature. He has long ears similar to that of a rabbit, with a curly tail ornamented with red-violet beads. However, when forced to engage in combat, Plaisir increases his body size to become larger than the average human.

When Plaisir is not controlled by darkness, he is often shown to be a kind and devout servant of Lord Starbow.

However, when under the control of Odium's darkness, Plaisir often acts mischievous and antagonistic towards the party and his fellow Prismatic Gods. He never takes his battle encounters with enemies seriously, often scoffing at them for being weaker than himself. This trait often leads to the other Prismatic Gods having a lack of faith in his reliability to complete tasks.

He especially loves to taunt those he considers his enemies in battle, often chuckling whenever he starts combat. He also has a strong hatred for Chrono Dragon, reveling in the thought of destroying him, with their rivalry so strong that he is able to recognize him through his disguise as Fake.

Lastly, he is also fought as a superboss on the 38th floor of Babil Tower. 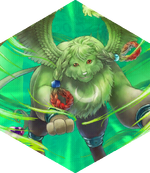 In the original free-to-play versions, Plaisir only appeared as a boss. Like a majority of the other Prismatic Gods, Plaisir was initially introduced to the game as a raid exclusive boss during the game's time as Final Fantasy Legends: Toki no Suishō. In this content, he served as the main boss of the "Plaisir of the Gale" raid event and was a DPS race-type boss for players to complete before the turn counter was up. Multiple reprints of the event were available as a filler-type event.

Plaisir would not receive a proper introduction into the game's story until the release of the "Eureka" arc in the relaunch of Final Fantasy Legends II. Introduced in the game's second "Eureka" update, his role in the story was the same as the premium version. However, his boss encounters did not occur during the "Eureka" arc, due to the storyline being solely dialogue based in the free-to-play versions.

Plaisir's alternate artwork.
Add a photo to this gallery

Plaisir is French for "pleasure".