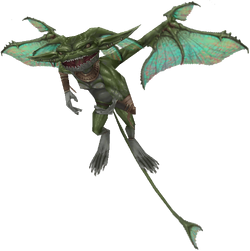 Pit Fiend (ピットフィーント or ピットフィーンド, Pittofīnto?), also known as Fiend, is a recurring enemy in the series.

Pit Fiend is an enemy fought at Jade Passage and on the world map after obtaining the Ultima Tome around Mysidia. It is a dangerous foe due to its usage of Stun XVI, and are capable of casting Fire XVI and inflicting Blind through their physical attacks.

Pit Fiend is an enemy fought at Sochen Cave Palace. It is not a very powerful foe, attacking primarily with physical attacks, but is also capable of using Aerora, Sleep, Drain, Fear, and Toxify. Pit Fiends are a prime source of Scorpio Gems.

Pit Fiend is an enemy fought at the Challenge Dungeon for the Ninja and Paladin in the original version of the game, but is dummied in later releases of the game. It is capable of casting Sleep and Firaga against the party.