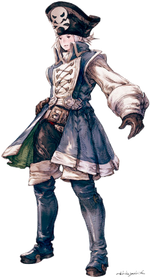 We love the ocean, and we love freedom. That's what piratin' be all about!

Pirate in Liberte from Final Fantasy: The 4 Heroes of Light

Pirates (海賊, Kaizoku?) are a recurring theme in the Final Fantasy series, that mainly featured in the early installments. Pirates in the Final Fantasy series are usually designed after the popular modern imagination of pirates, as rebellious, clever teams operating outside the bureaucracy of modern life. Imagery associated with pirates includes the Jolly Roger flag, which is the traditional name for the flags of European and American pirates, and a symbol for piracy that has been adopted by film-makers and toy manufacturers.

Pirate characters in Final Fantasy series appear in the more old school fantasy settings, such as the early installments and fairy tale-oriented spin-offs, and have appeared less when Final Fantasy as a series moved to more tangible settings. Pirate apparel has also been used as an aesthetic, in a way to give characters an easily recognizable appearance to amuse players, although the dress doesn't necessarily even fit with the theme of the character. Pirate outfits of this manner are usually optional, and also often obtainable via downloadable content. A recurring motif includes a female pirate captain who is often a playable character or a guest.

Pirates are met in Pravoka, where they have attacked the town. The captain of the pirates is Bikke and when the Warriors of Light approach him, he summons nine pirates to attack them. When they are defeated, Bikke regrets his crimes, and surrenders his ship to the party, allowing the player to travel across the world's oceans.

Leila is the leader of a pirate gang that offers Firion and the party a trip to Deist on their ship. However, once onboard Leila orders her pirates to attack the party. Once they are quickly defeated, the party extends a hand to Leila, asking her to join them. Her ship is then available to use to travel the seas. Pirates can be found loitering within Paloom and Poft.

Faris Scherwiz is the captain of a band of pirates who reside in a cave, aptly named Pirates' Hideout. Bartz, Lenna and Galuf come across the hideout on their way to the Wind Shrine, and are amazed the pirates are able to operate their sailing ship even if the wind of the world has died, and no other ship can sail. In truth, the pirates are using Syldra, a sea dragon, to pull the ship. Bartz and his friends infiltrate the hideout and sneak onboard the ship, but are discovered by Faris, the captain of the pirates, and captured.

Intrigued by Lenna's pendant, which Faris recognizes as identical to her own, she decides to aid Bartz and his friends on their quest to investigate the Wind Shrine, where Faris is made a Warrior of Light along with the three others, destined to save the world.

Pirates appear with Rouge, homage to Faris, as the leader of a band of pirates.

This section in Final Fantasy: Legend of the Crystals is empty or needs to be expanded. You can help the Final Fantasy Wiki by expanding it.

Although not referred to as pirates, AVALANCHE's symbol greatly resembles that of the Jolly Roger flag, traditionally associated with pirates. AVALANCHE are an eco-terrorist insurgent group opposing the actions of Shinra Electric Power Company.

Although the traditional skull and crossbones pirate flag prevalent in popular culture is usually depicted as black, many historians agree that the original pirate flag was red; red flags were common in naval warfare, to signal that no quarter would be given. This red flag was called Joli Rouge (pretty red) by the French, and may have been corrupted into English as Jolly Roger. From the red flag individual pirates might have begun to develop their own personal flags and in contrast with the well-known red flag, they used the black flag of quarantine and disease as the base, with the universal symbol for death, the skull and bones.

The term sky pirate is used for the freefolk who travel the world on airships. Though they are collectively called "pirates", their actual occupations vary, some searching for treasure, some traveling the world, while others are bandits who attack trade ships.

Sky pirates bear little resemblance to the traditional stereotypical pirates, not being associated with any specific regalia. The airships are also more futuristic in look, rather than resembling flying sailing ships.

Vaan, a thief living in Royal City of Rabanastre, dreams of owning an airship and becoming a sky pirate to escape all that is mundane in his life. While pillaging the royal palace he runs into Balthier and Fran, two sky pirates, and the three join forces to escape the palace when it is attacked by the Resistance. The sky pirates eventually join Princess Ashe on a quest to save the Kingdom of Dalmasca from war. Ba'Gamnan is a sky pirate who wants to catch Balthier to collect the bounty on him, and Reddas is a former Archadian Judge turned sky pirate, residing in the pirates' haven, Balfonheim Port.

At the end Vaan obtains his own airship, becoming a sky pirate with Penelo as his partner, setting the stage for Final Fantasy XII: Revenant Wings, that revolves around Vaan's band of sky pirates, including himself, Penelo, Filo and Kytes, although Balthier and Fran join him on his quest later.

Mog can be dressed in a pirate costume as part of his "A Wondrous Wardrobe" downloadable content outfits. Mog's pirate appearance also has a card in Final Fantasy Trading Card Game.

The city-state of Limsa Lominsa is home to several pirate groups, some of which are even part of the city administration and army. Notably, in Legacy version, the Marauder's guild itself was originally on a pirate ship anchored in town, the Astalicia.

Several pieces of equipment are modeled after stereotypical pirate garb.

The player can purchase a pirate outfit as downloadable content for King Leo, called "King's New Cloak", which gives a pirate theme outfit to the King. The outfit costs 100 Wii Points. This outfit also appears as Leo's attire in a Final Fantasy Trading Card Game card.

Pirate attire can be found in the form of armor; Pirate Hat and Pirate Outfit. Only Selkie characters can equip them.

Little Pirate is one of the "monsters" available for Mira to summon. Little Pirates become available for summoning once the player has purchased the "Darklord Elite Unit" from the Add-on content menu using Wii Points.

The Little Pirate's appearance is based on that of King Leo in his "King's New Cloak" outfit from Final Fantasy Crystal Chronicles: My Life as a King.

The skeleton enemies are all dressed up like pirates, wearing a pirate's hat, pirate coat, and holding a cutlass sword.

After being sent decades into the past, the Heroes of Light arrive around the time of the Glassworks Fair. Captain Drake and his pirates loot Liberte of their artworks including the kidnapping of Pione and Lilibelle. Inside the Pirates Hideout, Captain Drake is being controlled by a Seadevil and almost kills Lilibelle until the party interrupts him. Captain Drake and Lilibelle are set free from the demon's control and the Captain gives them the Rusty Compass.

Bikke is the pirate king and lives in the Pirate Hideout.

As part of downloadable content, player can download a costume for Vaan based on the concept of a pirate under the name "Pirate's Garb".

Mercedes is a pirate captain.

Faris is a pirate captain whose crew consists mainly of moogles.