Pinwheel with sharp, cutting blades. Use with the Throw command.

Pinwheel (かざぐるま, Kazaguruma?) or (円月輪, Engetsurin?), also known as Tack Star, is a recurring weapon in the Final Fantasy series. It is often a mid-ranked throwing weapon or Throw item, giving it the long range property, allowing a party member to deal full damage from the back row.

Pinwheel (also known as a Tack Star) is a throwing weapon for Shadow and is the strongest throwing weapon. It has an attack power of 190 and can be found in chests or won by betting a Fuma Shuriken in the Dragon's Neck Coliseum.

Pinwheel is a low-ranked weapon for Yuffie, and provides 37 Attack, Hit Rate of 104, and 9 Magic. It has two linked Materia slots, and is bought in Cosmo Canyon for 2,600 gil. Instead of being an actual shuriken like in other titles, the Pinwheel is literally a child's toy in Final Fantasy VII.

A weapon that can be used from a distance and have many advantages. The Pinwheel is one of the more basic projectile weapons.

The Pinwheel is the initial weapon for Rinoa, and can be modeled by using M-Stone Piece x3.

The Pinwheel is not an equippable weapon, but it can be thrown by Amarant. It is the weakest throwing ring, bought for 200 gil apiece from Madain Sari, Alexandria, Lindblum (disc 3 & 4), Oeilvert, and Desert Palace. It is also a rare find during Chocobo Hot and Cold. It has an Attack Power of 26, but Attack Power is doubled in the Throw damage calculation.

Pinwheels are throwing weapons that can be synthesized.

Pinwheel is a boomerang weapon that can be equipped by Jobless, Thief, Memorist, Ranger, and Ninja jobs. It can be found in the Underwater Temple and Mt. Gulg.

The Pinwheel is Rinoa's default weapon, and is based on the weapon's appearance in Final Fantasy VIII. Like all other characters' weapons, having it equipped carries no advantages or disadvantages.

Rinoa wields the Final Fantasy VIII version of the Pinwheel in her character model.

Pinwheel is a throwing weapon with a rarity of 2.

Pinwheel is featured as a throwing weapon, alongside Rinoa's Pinwheel from Final Fantasy VIII. The Pinwheel comes in SR, SR+, and SSR variety.

A type of throwing weapon, known as blaster edges, from a distant world. This weapon is equipped on the arm, and is capable of hitting distant targets by firing off a sharp blade. In its world of origin, it is said to have been used by a young woman who inherited a sorceress's powers during a battle with the nation of Galbadia.

Pinwheel (FFVIII) is a Throwing weapon obtained as the Super Trust Master reward from Rinoa & Angelo. It provides 237 MAG, 75% extra physical and magical damage against birds and machines, and has a damage range of 105-125%. When equipped by Rinoa, Rinoa & Angelo, and Successor Sorceress Rinoa, it also provides 500 MAG.

Rinoa's Pinwheel appeared as part of the Final Fantasy collaboration. 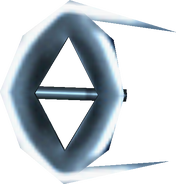 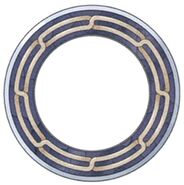 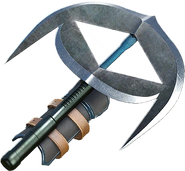 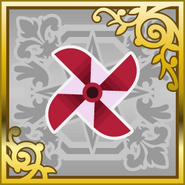 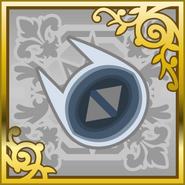 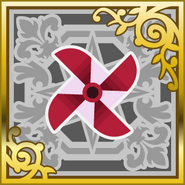 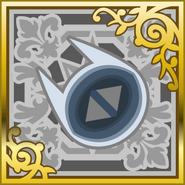 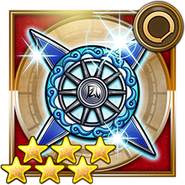 [view · edit · purge]A pinwheel is a simple toy made of a wheel of paper or plastic curls attached at its axle to a stick by a pin. It is designed to spin when blown upon. Pinwheel is also a type of traditional Japanese origami form that can be used as a toy pinwheel, as a base for more complicated models, or as a component of modular origami. In Japanese culture, the pinwheel can represent the cycle of life and becoming a child again, the turning of the pinwheel representing the Buddhist teaching of reincarnation.