Pinnacle Rocks is a location in Final Fantasy IX located near Lindblum on the Mist Continent.

Pinnacle Rocks can be accessed as early as disc 1, when the player is in control of Zidane. Only a small part of the area is available for exploration, and two treasure chests to be looted, but a cliff prevents further progress. A sign reports a ghostly presence in the area. Other than this, the rocks have no use at this point in the game. Pinnacle Rocks is later briefly visited as part of the story. After this, the deeper parts of Pinnacle Rocks cannot be revisited once the party exits them. The outer parts become inaccessible as well in the endgame due to an Iifa root blocking the entrance.

After fleeing from Alexandria Castle, Princess Garnet, Zidane, and Vivi use the Gargan Roo to seek refuge in Treno. Halfway there, a Ralvuimago scares the Gargant, preventing it from moving on. The party fights the Ralvuimago but it returns and chases after them. The Gargant panics and runs past the Treno station, crashing at Pinnacle Rocks.

After picking themselves out of the cart wreckage, the party meets an old man whom Garnet recognizes as the eidolon Ramuh, the Thunder God. She asks him for help but he wants to test her to see if she is fit to be his master. Ramuh has hidden five manifestations of himself in the forest, each telling part of the "Hero's Story". If Garnet arranges them in the proper order, Ramuh will become her eidolon.

Once the story is complete, Ramuh asks Garnet to choose between two possible conclusions. Regardless of which she chooses, he becomes her eidolon. When the party leaves, they witness the Battle of Lindblum.

This is where the party wakes up after the Gargant crashes. After meeting Ramuh, returning to this area will reveal the "Hero" part of the story.

"Hero"
Historian's explanation:
Although Joseph's death was not
reported to his daughter, the manner
of his death speaks for itself.
This is the story of a true hero.

The Path is divided in two areas: the first one contains the "Beginning" and "Human" parts of the story.

"Beginning"
Once upon a time, 33 small countries fought
together against an empire. One day, a
rebel troop visited a man named Joseph,
who lived with his daughter. Owing a
debt to the troop, he gladly accepted
their plea for help. They headed for a
cavern in the snow field.

"Human"
Historian's explanation:
The fact that they didn't report Joseph's
death to his daughter was indicative
of their guilt for failing to protect him.
In the end, heroes are also human.

While the second one has a lower section with the "Cooperation" part.

"Cooperation"
With Joseph's help, the loop defeated
the adamantoise in the snow field cavern and
acquired the Goddess Bell they needed to
enter the empire's castle.

And a higher section with the "Silence" part.

"Silence"
On their way home, they fell into a trap
set by a traitor. Joseph gave his life to
save the troop. The troop left without
telling Joseph's daughter, Nelly, about
the tragedy.

The letter the party delivers from Mosh in Alexandria to Monty, the moogle from the Evil Forest who escaped its petrification to Pinnacle Rocks:

Before leaving the Pinnacle Rocks, but after receiving Ramuh, Monty will get a letter:

The theme that plays in the interior of Pinnacle Rocks is called "Awakened Forest".

The "Hero's Story" is the story of Josef from Final Fantasy II.

The game contains some dummied extra dialogue after the party hears instructions from Ramuh on what to do to recruit him as Garnet's eidolon. After Garnet apologizes for wanting to partake in this detour, Zidane says that after seeing an eidolon destroy Cleyra, he also wants to look for a power that could counter such a thing.[1]

Pinnacle Rocks on the world map. 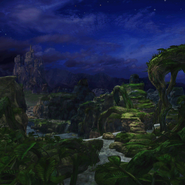 The entrance to Pinnacle Rocks, at night.

Zidane's reaction to the story.