Pig is a Black Magic spell with a casting time of 6, costs 1 MP and can be used by Palom, Rydia, Tellah, and Fusoya. It has a 10% accuracy in 2D versions, and 100% accuracy in 3D versions.

On the Easy Type version, the casting time was reduce to 1 and increase the base hit rate to 40%.

The Pig status disables the following commands: Summon, Darkness, Recall, Aim, Focus, Kick, Brace, Twincast, Bluff, Cry, Analyze, and Regen. It also disables all magic including monster magic other than the Black Magic spell Pig. White Magic users can still cast Esuna, but only outside of battle. In the PSP version the menu portrait for child Rydia, Palom, and Porom is a little different compared to the adult portrait featuring a piglet.

Some residents of Mythril are Pigs, and in Mysidia, a witch can turn the party into Pigs and back again (except in the 3D version).

Pig is a Black Magic spell known initially by the imposter Rydia, Palom, and Rydia. It inflicts Pig to one or all enemies at the cost of 1 MP.

Pig is learned by Rydia (level 20) and initially by Fusoya, Palom, and Biggs. The Polymorph Rod makes a return, along with it the Queen's Whip can turn enemies into Pig when attacking. There is also an unused weapon called Pig's Bamboo Sword.

The Band ability, Call Me Queen, can transform one enemy into a pig. 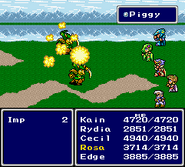