Yoko Shimomura, the main composer of FINAL FANTASY XV, has returned to produce this album, carefully selecting songs best suited as piano pieces and supervising the entire production! When composing songs, Shimomura is always mindful of the piano melodies which are further refined in these beautiful arrangements.

The back of the album has a piano with a photo of the party in front of the Regalia, reminiscent of the part where the player can choose their final photo from their saved photos in the game. Yoko Shimomura suggested the cover designer Yuki Matsuzawa include a "rare version" where, for example, one in every hundred copies would feature a photo of Cindy doing a silly pose. Matsuzawa thought it would be hilarious, but rejected the idea.[2] 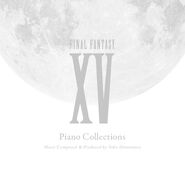 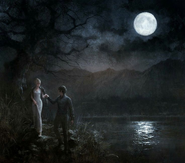 Sheet music book.
Add a photo to this gallery