Can anyone describe the emotions we get from music?

Music is not for thinking. It is meant for feeling. Don't use your head. Knowledge or experience is not needed in order to feel happiness from the white cold snow, warm smells of flowers, heart warming meal, blue ocean, or the touch of your lover's hand. Same applies to music. Just feel it.

If you wish to get in touch deeply with music, just try to set in with it. Music is a wave, as well as our feelings.

Believe in the music you are listening, and hand your heart over to it. It is like tuning a radio into the right station. When the wavelengths match (and only if), you will understand everything the music is wanting to tell you. Keep the emotions you get to your heart, such as joy, sadness, happiness, and anger. Do not be ashamed of being moved by music. Praise yourself for being so honest.

The original Piano Collections release back in 1994 includes a sheet music book with the arrangements for the pieces on the album. In subsequent releases, the album has been released without the accompanying book, and the book has been published separately. The book contains Reiko Nomura's solo piano arrangements from the Piano Collections: Final Fantasy VI album. The difficulty level is intermediate and the song titles have English translations. 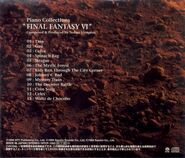