The piano (ピアノ, piano?) is a recurring element in the Final Fantasy series. At most times, the player can play the piano, which even has individual buttons.

The player can play the piano as part of a scene element. If the player uses the left side of the piano in Ur, the lead party member may play an off-key version of Beethoven's "Für Elise" (they will play it correctly if the right side of the piano is used). When interacting with the one in Amur, they will instead play the theme "Swift Twist" as the pub patrons get up and dance.

The player must play eight pianos to master their skills. They can then show their skills to the bard in Crescent and obtain the Hero's Rime.

The last piano is in Phantom Village. The player must head to the pub but not go in, but instead head behind it and go down to get behind the pub's counter. The door on the left leads outside, and heading down will come to a door. Inside, the player will arrive at some steps. The player should head down to reach the wall and turn left and press against the wall to reach a room that has steps leading up. It leads to the black chocobo. Before getting on the chocobo, the player can press against the left wall of the room that leads to it, and the last piano is in the next room.

Each time the player uses a new piano, it will play a real-world piece which exemplifies their increased proficiency of the instrument. The pieces are:

Mastering the piano skills in the mobile/Steam version earns the achievement "Piano Master".

There are two pianos in Nibelheim. The piano in Tifa Lockhart's house can be played to obtain a number of items, and by playing a small part of the "Main Theme of Final Fantasy VII", yields Tifa's ultimate Limit Break, Final Heaven.

The second piano is in Shinra Mansion. On the floor next to it is one of the clues to the safe combination, part of the sidequest to recruit Vincent Valentine. This piano can be played just like Tifa's, although some keys are broken. Playing this piano will give no rewards.

There is a piano inside the Sector 5 slums church, but access to it is blocked by rubble.

The Deling City hotel has a piano in its bar. During the Sorceress War, lounge singer Julia Heartilly played it nightly to the patrons, including her admirer, Laguna Loire. Julia plays the piano during a flashback, but the player cannot interact with the piano when visiting the Galbadia Hotel with Squall.

There is also an organ kept in the church chapel inside Ultimecia Castle. All keys must be held for a couple of seconds to remove the bars barring entrance to the canal.

Vegnagun is controlled by Shuyin through a piano-like device on its head. Yuna also has to play the correct notes on pianos scattered across the Farplane, if the player wishes to avoid battles with three Azi Dahaka. 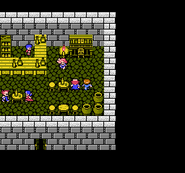 The Piano in Deling City in Final Fantasy VIII.