Cid Pollendina: Oh, shut up and help me remodel the Phon Coast page!
Please expand this article into a full one. The following tasks need to be completed:

The Phon Coast is a location in the land of Ivalice in Final Fantasy XII. It is the border of the Archadian Empire, and a long stretch of beaches and grasslands. A hunters' camp is a settlement where many hunters gather.

Coastal region lying along the Phon Straits which divide Archadia from Nabradia. Praised for its beautiful beaches of white sand, and lush greenery. A hunter's camp along the coast attracts adventurers and headhunters, forming a community where they might exchange information and rest between expeditions.

Of the many hunters roaming Ivalice, the best of the best, seeking out the rarest of marks, are known to gather in a camp along the Phon Coast. Unlike clans, the hunters that collect here have no leader, and all information exchanges, activities to support the camp, and payments for such, are handled on an individual basis.

The party passes through Phon Coast on their way to Archades, where Ashe wants to destroy the Empire's nethicite with the Sword of Kings. Balthier, who has seen Ashe's interest in the nethicite grow during their journey, stops to warn Ashe of the stones' power while the party takes a break on Phon Coast.

Balthier then goes on to reveal that Dr. Cid is his father and that he used to be a judge before he ran away from Archades to become a sky pirate. He doesn't want Ashe to end up the same way as his father did.

With this in mind, Ashe still decides to carry on her journey, and the party leaves the coast to travel inland toward the capital.

Connecting the regions of Nabradia and Archadia, the Phon Coast is located between the Salikawood and the Tchita Uplands. It has white sandy beaches that need to be crossed to reach Archades by land.

Leads to the Salikawood, contains a Save Crystal and where the Strahl is berthed. The name may be based in Kaukura, an atoll in the Tuamotu group in French Polynesia.

The origin of the name is not clear, the name sounds a lot like rest, but is not clear. There is a Hebrew word רֵאשִׁית, 'reshit' which means 'beginning'.

The name may be relative to Maurea, a genus of sea snails, marine gastropod mollusks, in the family Calliostomatidae within the superfamily Trochoidea, the top snails, turban snails and their allies. Also, it can be based in Mo'orea island, also spelled Moorea, which is a volcanic island inside Windward islands in French Polynesia.

Contains a chocobo path that leads to Caima Hills and vice-versa. The name may be based in Bora Bora island (Tahitian: Pora Pora) which is an island group in the Leeward Islands in French Polynesia.

The name may be based in Tiaruanu, a islets (or motus) in the Tetiꞌaroa, an atoll in the Windward group of the Society Islands of French Polynesia.

The name may be based in on the island of Ua Huka, one of the Marquesas Islands, in French Polynesia.

A Wayward Chocobo lurks here. The name may be based in Hakaui, which is a waterfall on Nuku Hiva island inside the Marquesas Islands in French Polynesia.

A Wayward Chocobo lurks here. On the western side is a Chocobo path leading to and from Pora-Pora Sands. The origin of the name is not clear, it can be a reference to Cayman islands in Caribbean Sea, on the other hand, there is the plant, Glochidion longfieldiae, or kaema in the Rapa language, in Rapa island in French Polynesia. And yet, Kyma (κύμα) is a Greek word meaning wave.

In the northern section, there is a hidden passage that leads straight to Limatra Hills and vice versa. On the beach is a cluster of 16 treasure chests that must not be looted from if one wants to receive the Zodiac Spear later on. This gimmick was removed in the Zodiac versions and the chests are safe to open. The name may be based in Vaadhoo Island in the Maldives.

In the southern side is a hidden path that leads to and from The Vaddu Strand. The name may be based in Rimatara, which is the westernmost inhabited island in the Austral Islands of French Polynesia.

Leads to the Tchita Uplands and contains a Save Crystal. The name may be based in Rava island in the Croatian part of the Adriatic Sea, or Rawa island (Malay: Pulau Rawa), a coral island in Mersing District, Johor, Malaysia. And also, Ha‘ava, which is the Marquesan name of the 4 km (2.5 mi.) wide channel that separates Tahuata from Hiva Oa, in the southern Marquesas Islands.

However, the weather does not change until after the story events at the Draklor Laboratory and all of Balfonheim is available.

The weather is either sunny or cloudy/rainy. During the cloudy/rainy weather, the weather changes when zoning between areas within the coast. When it is raining, the Air Elemental is encountered in the Pora-Pora Sands and Limatra Hills areas. Also, when raining, Fire damage is halved and Lightning damage is boosted. To change weather in Phon Coast the player must zone from a different map, e.g. Salika Woods, until the weather changes.

In the original version, Phon Coast has many Hi-Potions and Motes. With the Diamond Armlet equipped, the common treasure is a Knot of Rust and the rare treasure is a good healing item (like an Elixir) or a high-level Mote (such as the Scathe Mote).

Still in the original version of the game, the Phon Coast contains a treasure (labeled in red below) that, once claimed, prevents the player from obtaining the Zodiac Spear (one of the most powerful weapons) in the Necrohol of Nabudis. It is among the 16 chests on the beach in Vaddu Strand. They contain Knots of Rust so the player can easily ignore all of them even if only one of them is the forbidden one. The 16 chests correspond to the 16 chests in the Necrohol of Nabudis and, once claimed, will disappear from both locations, which is why claiming the treasure at Phon Coast prevents the player from getting the spear at Necrohol of Nabudis. If the player loots the chests with the Diamond Armlet equipped, they contain Dark Matter. It is advised to first claim the Zodiac Spear and then loot the other chests with the Diamond Armlet equipped, either at the Necrohol or at Phon Coast.

In the Zodiac versions, all treasures are different and the concept of "forbidden chests" was removed. It is safe to open all treasures in the Vaddu Strand formation, which now contain miscellaneous goods. The items are not random, however; in Japanese, the treasures' first syllables form a clue as where the new Zodiac-exclusive three strongest invisible weapons are located.

In the Zodiac versions, the contents of these treasure chests have been altered significantly. They include items like Teleport Stones and Braid Wool not normally found in treasures. This is a clue that this set of treasure chests hold a secret.

To unlock this secret, the player must take the first Japanese character/syllable of each treasure going from last to first (east to west).

Doing so produces the following syllables.

Hunt Club is a group of unruly bangaa hunters who operate out of one of the docked ships. Rather than Marks, they prefer to hunt the more elusive Rare Game. After the player completes the events at Draklor Laboratory, they can return to Hunters' Camp and the bangaa will petition Vaan to hunt for trophy Rare Game and bring back the proof. There are 30 trophies in total and, depending on which bangaa Vaan gives the trophies to, he gets varying rewards for his efforts. The objective is to collect the 30 trophies and trade them to Atak, Stok, and Blok to unlock items in the Shifty-Eyed Merchant's store (the results differ between the original PlayStation 2 version and the updated Zodiac versions). Since there are only 30 trophies, it is impossible to unlock everything.

Some of the Rare Game are found at Phon Coast. To spawn Thalassinon, the player must talk to the "Huntmaster" in the rare game hunt party in the Phon Coast, he will give the player details of what they must do. Then the player must stand at the highest point in the Vaddu Strand area for ten seconds. The enemy will appear below on the beach.

To spawn the Apsara, the player must kill at least ten Piranhas in the Phon Coast (no chain required) without leaving the Phon Coast. The best place to kill Piranhas is the Vaddu Strand. The Apsara appears on the beach area of Mauleia Strand.

To find Skullash the player must have spoken to the "Huntmaster" and started the Rare Game quest. Afterward there is a 40% chance it will appear among the Pyrolisks in Cape Tialan.

After the Antlion hunt in the Lhusu Mines has been completed, the Site 11 Key can be found in the Hunters' Camp, next to a fallen Bhujerban. This unlocks a gate in Lhusu Mines to get to the deepest parts of the complex.

The theme of Phon Coast is simply called "The Phon Coast".

A live recording of the track is part of the "Ivalice Landscapes" medley on the A New World: intimate music from Final Fantasy - Volume II album

"The Phon Coast" is the fourteenth track of the Memories of FFXII album playable in the music player, bought from Verinas Mart - Ravatogh for 100 gil. It also appears in Theatrhythm Final Fantasy All-Star Carnival as a Field Music Sequence and in Dissidia Final Fantasy arcade version as a battle music. 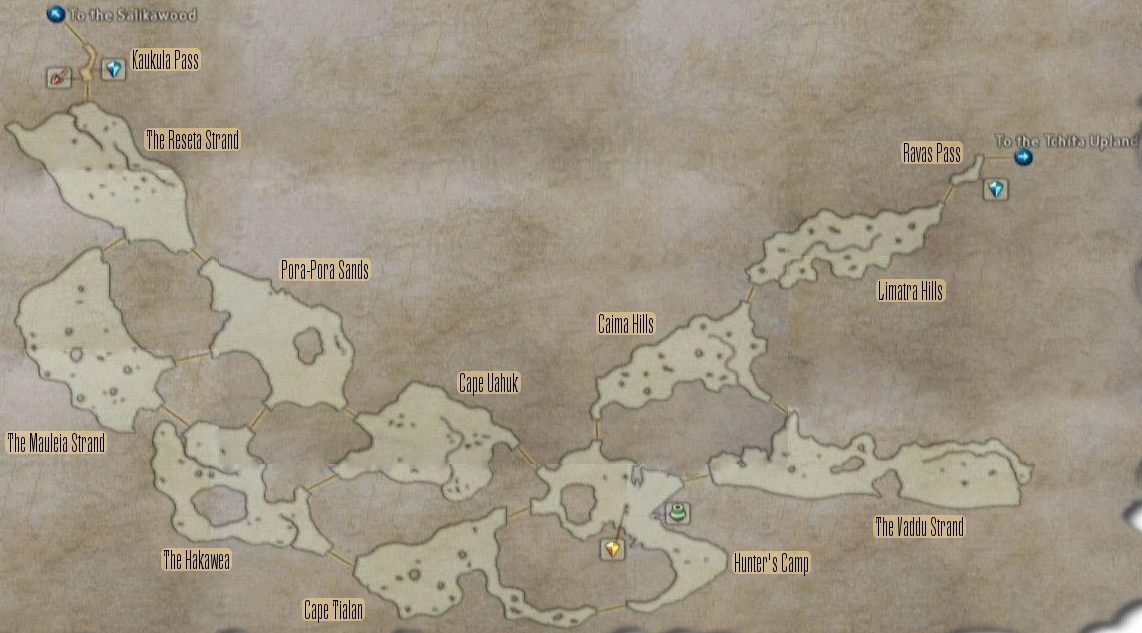 Map from the original Final Fantasy XII that includes all treasure information and hidden passages.

The Phon Coast was the first area the fans could play at the 2004 E3 conference. The area is also included in the playable demo released in North America, a year before the game, sporting different enemies than in the final game version.

The Phon Coast appears as the background for the DLC Field Music Sequence for "Phon Coast."

The party at Hunters' Camp. 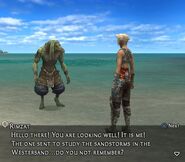 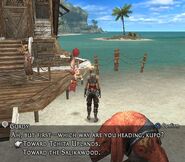 Fran beside the Save Crystal at Kaukula Pass in Phon Coast.