The Phoenix Cave is a location in Final Fantasy VI. It appears in the World of Ruin, and is the resting place of the magicite Phoenix. The cave and the events shortly thereafter marks the culmination of Locke's long quest to find the Phoenix to use it to revive his lost lover Rachel.

The Phoenix Cave is located northwest of Tzen, marked by a star-shaped mountain range and can be reached via the Falcon to drop the party members into the center of the mountain. It requires two parties to be traversed, working together to open new paths for each other to reach the final room. The dungeon is a volcanic area that is also home to one of the eight legendary dragons, the Red Dragon.

Completing the location in the 2014 mobile/Steam version earns the More Than King achievement.

While the cave is inaccessible in the World of Balance, Emperor Gestahl apparently had the Phoenix magicite and hid it within the cave. Rumor of the Empire having access to a "legendary treasure" that could restore the dead back to life spread beyond the Empire, and Locke searched the world over for leads on it. After Gestahl's death, a letter containing a hint to the location of the Phoenix Cave was concealed in his painting displayed at Owzer's Mansion, claiming that the treasure is hidden "where the mountains form a star".

In the World of Ruin, Locke found the location of the Phoenix Cave and set out to find it. The party enters the cave later and reunites with Locke in its final chamber where he has found the Phoenix. The party returns to Kohlingen where Locke attempts to use the Phoenix to revive Rachel. Afterward, Locke rejoins the party.

The Phoenix Cave is divided into two floors, with the upper floor being partially flooded and the lower floor being full of lava. The dungeon is full of floor switches that create paths or remove hazards in another part of the cave. The player controls two parties that must work together to get through the cave by triggering switches that open the path forward. Near the end of the cave, the upper floor's flooded area is drained into the basement, cooling the lava to the point it can be walked on and the final area of the cave can be reached. The final obstacle is two buttons that the parties must stand on together to lower a piece of rock that obstructs the exit. When the party first explores the cave and meets Locke here, a cutscene will occur and they automatically leave; on subsequent visits a glowing star in the area where Locke was will teleport the party outside. In the Pixel Remaster port, an additional exit point was placed shortly before the save point.

Though there are numerous chests in the cave, many of them are empty. Once Locke rejoins the party, he reveals he had emptied the chests, and the treasures he retrieved are given to the party. There is no relation to the items received from Locke and which empty chests are opened, so it is best to just ignore them.

To the left of the first doorway is a chest with a pitfall in front of it, after falling down the player can go down and up a flight of stairs to extend a bridge to the chest, which contains a Wing Edge. To the left on the first floor near the early rows of spikes is a chest behind a row of spikes, and below it a chest with a Teleport Stone. In the lava room are two chests in plain sight but both are empty. The other party can find a chest behind a set of spikes that is also empty. In the smaller lava room later on is a chest reached by jumping over the rocks, but it is empty. Once the room is drained, a chest only accessible by walking on the lava contains a Ribbon. Finally, near the Red Dragon is a chest with a Dragon Horn.

The multiple parties using the switches in the dungeon.

From the save point, take Party B up and step on the switch to retract the spikes. Take Party A back upstairs and go left over the spikes and down into a smaller lava room. Hop around the rocks in a loop to another staircase that opens on a ledge over the flooded area of the upper floor. Pull the switch to drain the water into the lower room. Move Party B left to where a staircase defends into the formerly-flooded area and step on the switch to move the rocks in the area so Party A can pass. Move Party A down and up the stairs and onto the switch to make some rocks appear. Take Party B and move them through the formerl-flooded area to a staircase into the lava room, the chest in the middle room has a Ribbon, then go up the upper-left stairs. Upstairs go down and jump across the rocks.

At this point the two parties are reunited, move them onto the two buttons below to lower the rock and open the path to the end of the cave.

One of the eight legendary dragons, the Red Dragon, prowls the end of the cave near the two switches. Either party can face it by climbing the stairs to the area that was drained of water and going down.

There is also a chest near the Red Dragon containing a Dragon Horn - reaching the chest without engaging the Red Dragon is possible but largely luck based as the dragon moves in random directions in this area and will initiate battle if the player gets within one tile of it, so the party must just stay out of range and wait until the dragon moves so they can reach the chest safely. 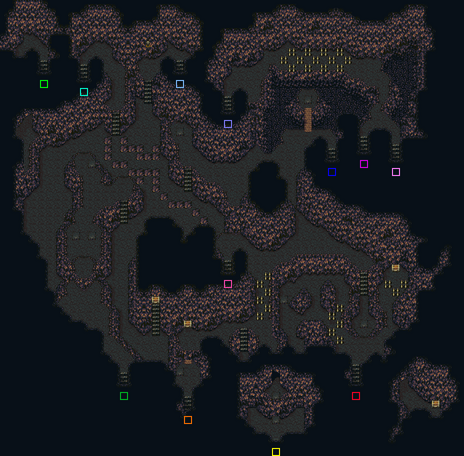 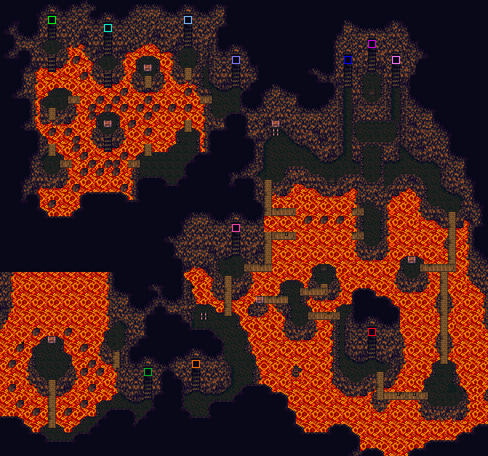 "Esper World", also known as "Another World of Beasts", is the background theme of the Phoenix Cave.

The Phoenix Cave is the setting for a regular dungeon and is also featured in the Challenge Event Legendary Plunder.

As the player controls two parties in this dungeon, they can exploit the save point glitch to allow them to save the game and use a Tent anywhere in the dungeon with Party A. In particular this can be useful for facing the Red Dragon, as Party A can get all the way to the dragon's territory with Party B still on the save point, so the party can be fully healed before fighting the boss. 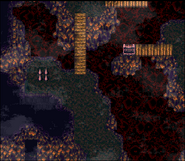 The Phoenix Cave on the world map (2014 mobile/Steam).

Locke reunites with the party (2014 mobile/Steam).