Phoenix is a pseudo-Guardian Force in Final Fantasy VIII. It is a flaming bird that revives fallen party members while attacking enemies with a wave of fire. It is summoned by consuming a Phoenix Pinion item. After being summoned once, it has a chance to appear randomly to save the player from a Game Over if all party members fall in battle.

The player can obtain a Phoenix Pinion from the fifth floor Triple Triad player in the D-District Prison with 3/256 chance.

One is given as a reward for completing the Shumi Village stone searching sidequest. After getting all five stones, the Elder will give the party a Phoenix Pinion.

A Phoenix Pinion is found in Lunatic Pandora with the present-day party if the player opened all three trapdoors as Laguna in the Centra Excavation Site.

One can be acquired in Winhill Chocobo Road as a reward for running into the chicobo (although the screen incorrectly says the reward was a Phoenix Down).

Phoenix is summoned when the player uses the Phoenix Pinion item in battle. It deals Fire-elemental damage to all opponents and revives knocked out party members with 12.5% of their Max HP. When called upon, a line of fire draws Phoenix's silhouette on the ground and it emerges through it, taking off into the sky in a burst of fire.

After being summoned once, Phoenix will randomly appear when all party members have been knocked out or afflicted with the Petrify status (although it cannot heal Petrify and the player will get a Game Over anyway), with a 65/256 chance (25.4%). Adding more Phoenix Pinions to the inventory does not increase the chances that Phoenix will appear.

In the final dungeon, if Phoenix appears while Resurrection is sealed, its attempt to revive the party will fail.

Its damage is calculated as follows:<ref>ForteGSOmega (02/02/2010). Final Fantasy VIII – Battle Mechanics FAQ. GameFAQs. Archived from the original on 15th October 2020.

There is an exploit the player can do to repeatedly get the UFO?'s battle spoils by both defeating the UFO? and escaping the battle, leaving the encounter still available. The UFO? needs to be defeated by the auto-triggered Phoenix, which glitches up the UFO?'s defeat sequence and the player can run away.

Phoenix is a fire-elemental Level 9 GF Card in Triple Triad used for playing the minigame and for turning into 3 Phoenix Spirits with Quezacotl's Card Mod. It is held by the Presidential Aide in Esthar City as part of the Queen of Cards sidequest, and the player must lose the Doomtrain card to her for Phoenix to become available in Esthar.

Phoenix appears as a summon whose Flames of Rebirth protects the summoner from Bravery Breaks for a short time—if the summoner would be inflicted with a Bravery Break while Phoenix is in effect, their Bravery Points are restored to full. Phoenix's manual summon shows the artwork of its Final Fantasy VIII appearance. It is obtained from the second stage of the Destiny Odyssey III story.

Phoenix returns as a summon with the same function as in Dissidia. The manual version can be purchased from certain Moogle Shops for 30 KP. 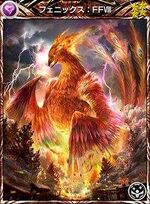