Phoenix is an esper in Final Fantasy VI who can be acquired as a magicite.

The Phoenix is a large bird, with a gray body, but bright red wings. It leaves behind it a bright red trail of fire as it flies.

At some point in the distant past, the Phoenix turned itself into magicite and passed into legend. It came into the possession of Emperor Gestahl, and rumor of the Gestahlian Empire possessing a "legendary treasure" that could bring the dead back to life spread across the world. Eventually the Emperor hid the Phoenix magicite in a cave at a star-shaped mountain.

Locke heard of the rumors of the treasure and sought it to revive his dead lover, Rachel. In the World of Ruin Locke found the cave and retrieved the Phoenix, shortly before the party found him. The magicite had deep cracks in it from age and Locke feared it would not be enough, but the party took him to Kohlingen to try.

Locke placed the Phoenix on Rachel's body, and after a moment it glowed brightly and shattered. Rachel was revived for a few brief moments and spoke to Locke, and told him to let go of his pain and guilt. Rachel then offered herself to the Phoenix and became one with it, reforming its magicite and restoring its power, and Locke took it with him as he rejoined the party.

Phoenix costs 110 MP to summon and uses Flames of Rebirth (Life Giver in the Super NES and PlayStation versions), which revives all KO'd party members with 25% of their max HP. It does not provide any stat boosts upon leveling up.

Phoenix can be a useful summon in a pinch, but its steep high MP cost can be inconvenient if the summoner is unable to use it when needed.

Phoenix teaches five extremely useful spells, and is the only esper to teach Arise and Reraise. It also teaches Curaga and Firaga at higher rates than the only other two espers that teach these spells.

The Phoenix is closely connected to Locke, and is featured in a trio of higher-order abilities: his C20 skill attack is "Phoenix Ray"; the bird appears as a badge for the overhead buff granted by his LD Ability; and it is drawn as part of Locke's Finishing Burst "Forever-Shining Magicite". 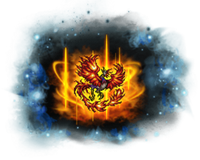 The Final Fantasy VI incarnation of Phoenix is one of the Rank 5 fire-elemental magicite bosses in Record Keeper, intended to be fought with physical parties. It Flames of Rebirth and Savage Flames of Rebirth to heal itself, and the latter also deals fire damage to the party, and it can use other fire-themed attacks originating from Final Fantasy VI, including Fireball, Meltdown, and Flare Star.

Phoenix's magicite has the abilities Dampen Blizzard and HP Boon, which raise the party's ice-elemental defense and HP, respectively. Its summon attack Ultra Flames of Rebirth deals fire-elemental damage to all enemies that can break the damage cap, and heals the party and revives any KO'd allies. Its attacks are Lunge, Firaga, and Death's Pyre.

In the original Super NES version script, much foreshadowing for the existence of the Phoenix is removed. Throughout the game there are repeated mentions of a "legendary treasure" rumored to exist within the Empire that can revive the dead, but most of these lines were changed in the Super NES version to more generally refer to valuable treasure or someone seeking a way to revive the dead. The Game Boy Advance script restored this specific terminology.