Phantom Village, also known as Mirage village, is a town in the merged world in Final Fantasy V. Time in the town stopped, as the town was caught in the Interdimensional Rift for over 1,000 years.

Phantom Village is the only town not represented by a town icon on the map, instead just being situated in the center of a patch of forest. When trying to enter the village, sometimes a battle intro may play with sound and visual effects, but if the player was lucky at the moment of search, they are taken to the village instead of the battle. As well as the black chocobo, the best items, weapons, armor, and magic can be bought here. Each establishment has two vendors, one which sells fair items, the second selling rare items. The catch is in locating the second vendor, as they are hidden and difficult to get to.

When the world was split 1,000 years before the events of Final Fantasy V following the defeat of Enuo,[1] Phantom Village went to neither world, and was left floating in the Rift, trapped in the space between dimensions, with time stopping as a result.[2][note 1]

When Exdeath merged the worlds in Final Fantasy V, the village reappeared in a forest on the southern end of the world. A few in Crescent were aware of its reappearance in the forest,[3] and a black chocobo wandered through.[2][note 2] Bartz Klauser and the Light Warriors arrived to pick up items and spells, as well as fetch the black chocobo to travel to other parts of the world.

While facing Exdeath in the Interdimensional Rift, Bartz and the Light Warriors passed through the village again, though time had frozen entirely.

The Phantom Village is geographically located within a forest on the southern tip of the merged world. The village does not appear on the world map at all, suggesting it is well-hidden.

The Phantom Village resembles villages throughout the world architecturally. What separates it from the others is two things: each shop has two merchants with one being reached via a hidden passage, and all villagers wear turbans and entirely different attire to those from other villages.[note 3]

Visiting the Phantom Village is optional, but worthwhile to obtain equipment and spells. It can accessed from a forest in the southern-most end of the map at any point after the airship is obtained, and must be visited to fetch the black chocobo and travel to the Phoenix Tower and North Mountain.

A building in the town contains a door that appears sealed. When exploring the Interdimensional Rift, the player enters the time-frozen town through this door. A healing pot that fully restores the party can still be used, though the villagers cannot be interacted with, and the player must simply leave through its entrance on the right to proceed through the dungeon.

The shops (see below) and almost all areas in Phantom Village have hidden passages, leading to hidden vendors. There is a secret door in every building, except for the inn. The secret vendors sell rare items.

The party leader can play a piano at the village. Playing all the pianos in the world acquires the last song, Hero's Rime, after showing the newfound pianist skills to the bard in Crescent.

The last piano is in Phantom Village. The player must head to the pub but not go in, instead, head behind it, and go down to get behind the pub's counter. The door on the left leads outside, and heading down will come to a door. Inside, the player will arrive at some steps. The player should head down to reach the wall and turn left and press against the wall to reach a room that has steps leading up. It leads to the black chocobo. Before getting on the chocobo, the player can press against the left wall of the room that leads to it, and the last piano is in the next room.

If the player played all the previous ones, the party leader will play an excerpt from Debussy's "Arabesque No. 1".

The background theme that plays in Phantom Village is called "Sealed Book". 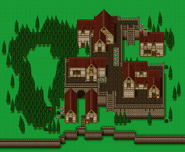 The map of Phantom Village (SNES).

Phantom Village in the Overworld (GBA).

[view · edit · purge]A phantom is a ghost, a physical manifestation of the soul or spirit of a deceased person.

[view · edit · purge]Mirages are naturally-occurring, optical phenomena in which light rays are bent to produce displaced images of distant objects. The word "mirage" is of French origin and derived from the Latin mirari, which means "to look at" or "to wonder at".