Abilities:
Evil Eye (I-III)Passive:
Time from last to next action -28%

So-taro
Persephone is a dark-elemental Eidolon from Final Fantasy Dimensions II. She can be obtained as a signet for Morrow by completing his eighth character episode, "Mootie's Past and Future".

If obtained the moment it becomes available in Chapter 4-2 of the "Crystal of Time" arc, her signet will provide Morrow with a decent boost in HP, attack, and speed. The signet's Evil Eye attacks deal heavy physical damage to undead and giant-type enemies and can delay their next actions, making it an ideal ability during the finale portions of the first arc. Its Black Sky summon attack is one of the strongest summon abilities available at that moment of the game, being able to inflict ten dark-elemental attacks to a single enemy.

The signet's passive of decreasing the amount of time until Morrow's next turn after performing an action by 28% has some usage during the opening of the game's "Eureka" arc, however it is eventually phased out as new signets become available during the arc's progression.

In addition, Morrow is equipped with a fully evolved Persephone signet during the game's opening tutorial.

Persephone's description from the original free-to-play versions mentions her as the queen of the underworld and serves as the goddess of death in the world of Final Fantasy Dimensions II. Her default form depicts Persephone as a petite woman with long black hair. She wears a black fedora, poncho, and platform thigh-high boots.

Her second artwork transforms her poncho into a long cloak, exposing her half-naked torso with a bramble of roses growing from her stomach; a reference to the actual Persephone in Greek mythology. At the same time a nude woman appears behind Persephone, with the two reaching for each other's hands.

Persephone's final artwork has her retain her appearance from her second artwork. The woman present in the second artwork transforms herself into a crimson great sword, with the sword's hilt decoration depicting the woman peacefully sleeping.

The following are the abilities Morrow can learn from Persephone:

In the original Japanese free-to-play versions, Persephone's signet became available during the game's time as Final Fantasy Legends: Toki no Suishō. Her signet could only be obtained from the game's summon draw shop. Persephone instead taught the Crushing Blow (I-IV) abilities and could be equipped by all party members.

By default, Persephone was able to go up to rank 7. However, the summon was able to go to rank 8 through limit-breaking materials that dropped in raids. She was a SS+ rank signet and had a cost of 18 to equip to a character. 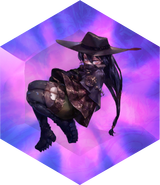 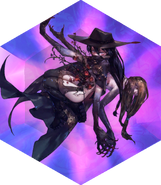 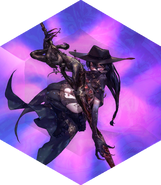 [view · edit · purge]Persephone in Greek mythology was the goddess of vegetation, often being associated with nature and spring. She was the daughter of Zeus and Demeter, and after her abduction and marriage to Hades, became queen of the underworld.