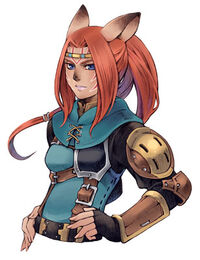 Perih Vashai is a non-playable character from Final Fantasy XI. She is chieftainess of the Mithra residing in the Federation of Windurst and a veteran of the Crystal War. She was once a renowned archer but has lost her sight. Perih waits in Windurst Woods to counsel adventurers on the ways of a Ranger.

During the Crystal War Perih Vashai traveled to Mindartia from Elshimo Island as one of many Mithra Mercenaries hired to oppose the Yagudo Theomilitary and its allies. Wielding her Azure Bow she became Mercenary Major of the Anaconda Unit, a division specializing in archery. Alongside Romaa Mihgo and her Cobra Unit the Anacondas made great strides in the defense of Fort Karugo-Narugo and Windurst itself.

In Windurst Waters Perih observed a Sin Hunter named Shikaree G following members of a caravan departing for the Grand Duchy of Jeuno. After confronting this hunter Perih deduced that one of the travelers had been Nhev Befrathi, a former Mithran chieftainess condemned for failing to control the bloodshed surrounding the infamous Bow of Light. Perih then recalled that Lehko Habhoka, a high-ranking Mithra in the war effort, had been the son of the woman who forged the same bow.

Soon after Beastmen laid siege to Windurst with an army too great for the Federation's conventional defenders. Karaha-Baruha and Robel-Akbel therefore summoned Fenrir to challenge the invading force. They could not maintain control of the beast in the face of Tzee Xicu the Manifest, however, and were themselves absorbed by the avatar. Lehko attempted to use the Bow of Light to destroy Fenrir but Perih disarmed him before the dangerous weapon could be activated. Tzee and Fenrir subsequently departed for Castle Oztroja.

Perih confiscated the Bow of Light and the Mithra Mercenaries moved to the Meriphataud Mountains to prepare a counterattack. As they made camp they were approached by a mortally wounded Nhev Befrathi, who had eluded Shikaree G only to be set upon by the Yagudo. Members of Nhev's caravan, including her daughter Syu, had been imprisoned in Oztroja. She begged the assembled Mithra to employ the Bow of Light in a rescue attempt and died in Perih's arms.

A small task force led by Perih and Lekho infiltrated Castle Oztroja to confront Tzee Xicu and liberate the hostages. After defeating the Yagudo leader Perih and Lehko hurried through the fortress only to encounter Shikaree G, who intended to execute Lehko and retrieve his mother's bow. Though Lehko was quick to support the Sin Hunter's arguments against him, Perih overlooked his self-incrimination and convinced Shikaree to step aside and see what the future would hold. They then turned to the task of subduing Fenrir as he roamed Oztroja's halls. Lehko provided Perih with the means to unlock the Bow of Light's power and sent her outside while he wrestled the beast into position.

At Lehko's signal Perih drew the cursed bow and loosed a luminous bolt across the Yagudo forces. The arrow shattered in the sky above the beastmen and sent a cascade of piercing shards through their vulnerable ranks. Then, though already exhausted, Perih knocked a second arrow and unleashed it upon Fenrir. The great beast crumpled and was put to rest, though at the cost of Perih's sight. The Mithran hostages, including Syu, were subsequently able to return from the battlefield.

For victory over the Yagudo the Mithra Mercenaries were awarded a portion of the Federation's land. Those like Perih who had grown to prefer temperate Mindartian climates were eager to accept this prize. There remained the problem of Syu Befrathi and the Bow of Light, however, for although Shikaree G had abandoned the chase it was likely that other Mithran trackers would pursue them. Nhev Befrathi's death would not dissuade them from executing the sinner's daughter.

Perih and her allies decided to send Syu and the bow north to Xarcabard. The weapon's core had originated there and Perih believed that the Sin Hunters would never discover anything hidden in that frozen landscape. To ensure Syu's safety Perih concealed the girl's identity by manipulating the twinstone earrings that distinguish Mithran mother-daughter pairs. Perih gave her own earring to Syu so that onlookers would mistake her for Perih's daughter. The conspirators then planted the original Befrathi earrings in Castle Oztroja, where they would claim Nhev had died, and the Eldieme Necropolis, where a false grave was laid for Syu. Finally they collected Perih's actual daughter, who had been hidden in Jeuno for safekeeping during the siege on Windurst, and exchanged her earring for one that had no partner.

Perih's daughter was subsequently taken in by Heaven's Tower as an orphan named Semih Lafihna. Perih would pretend that her daughter no longer existed and keep Semih's original twinstone earring as her own for the next twenty years. During that time Semih would become captain of the Sibyl Guard and a well known figure in modern Vana'diel.

Eventually Shikaree G, having arrived at the end of her life in the Mithran homeland, confesses to not having killed Syu Befrathi. This inspires younger tracker Shikaree M to cross the sea and interrogate Perih and Semih regarding events two decades prior. With the assistance of an adventurer Perih is able to convince the Sin Hunter that the Befrathis had already perished. Shikaree obtains other testimony regarding the siege on Castle Oztroja, however, and comes to believe that Perih had both wielded the Bow of Light and kept the sinful weapon for herself.

With carefully chosen words Perih sets Semih on the road to Xarcabard. Syu Befrathi is alive and well there and in the intervening years has rendered the Bow of Light inert by removing the dangerous magicite at its heart. Semih returns from the Northlands with the disabled bow, which pacifies Shikaree M, and Perih's twinstone earring. This prompts Perih to finally reveal herself as Semih's mother. Though Semih claims no ill will toward Perih it remains to be seen if their relationship will overcome the decades lost between them. 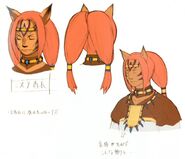