"A fiend whose incredible speed makes it an elusive and annoying foe. Beware its Mind Peck attack, which causes MP damage."

Mind Pecker
Nothing to learn

"Sometimes uses Poison and Silence attacks. Its speed makes it a terribly annoying opponent that can easily dodge attacks if your accuracy isn't high enough."

They are a minor nuisance as they can reduce MP with its Mind Pecker attack and inflicts statuses when in Oversoul. Like the rest of it's kind it is weak, and poses no threat.

Stop staring into my soul! I don't need anyone poking around to try to figure me out! There's nothing I have to say to you!

Why won't you leave me alone? I want to sit here unnoticed until I get sent off. I always kept to myself in a tiny room in the temple, staring outside from my window. I had no friends, no family to look out for me. If I were to suddenly vanish one day, would anything be different?

Since I was supposedly orphaned after an attack by Sin, I was raised in the temple in Kilika. They tell me my parents were killed by Sin, but I know that's a lie. Why would I be the only one to survive? Why would they leave me all alone? The monks told me that many other children were orphaned by Sin... They told me I had to be strong to provide hope for the future of Spira. But I didn't want to go on living in such a sad world.

So I decided to take a gamble. One night, I fled the temple. I knew how dangerous the woods were at night and that I should steer clear, but I went anyway. I knew that no matter what happened, I had to be able to face my problems alone. If I couldn't get through the forest, there was no reason to go on. That was how I felt back then. I laid my life on the line. But when I encountered a fiend, I froze. "I don't want to die!" I screamed. It was the first time in my life that I truly wanted to live.

In the Fiend Tale ending, Peregrine accepts his new status as he feels more alive than he did as a human. 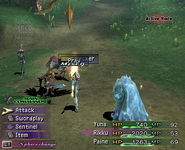 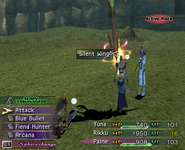 Silent Wing.
Add a photo to this gallery

[view · edit · purge]Peregrine falcon is a widespread bird of prey in the family Falconidae. The peregrine is renowned for its speed, reaching over 320 km/h (200 mph) during its characteristic hunting stoop making it the fastest member of the animal kingdom.

Retrieved from "https://finalfantasy.fandom.com/wiki/Peregrine?oldid=3239279"
Community content is available under CC-BY-SA unless otherwise noted.