Final Fantasy games that have random encounters on a world map use divisions to separate where certain sets of encounters are fought. Many of the earlier games divide the map into a grid of squares of equal size. Depending on the location on the grid the player traversing the world map is standing on, different enemies will be encountered. Sometimes, due to a programming oversight, grid squares with encounters designed for one area overlap with land from another area. This often allows monsters intended to be fought when the party reaches a certain part or area in the story to be fought earlier. Many of these areas are in remote places where players have to go out of their way to reach. Players can exploit these areas to grind for experience and gil early.

The Final Fantasy Pixel Remaster versions of the games have removed Peninsula of Power areas while not changing the geography of the world maps, implying that the grids that older versions employed are no longer in use.

The Peninsula of Power is a peninsula northeast of Pravoka, accessible by ship. In the northernmost tip monsters usually encountered in the Lufenia area appear, allowing for early access of these monsters.

This occurs because the world map is divided into an eight-by-eight grid, each containing 32-by-32 squares. The grid determines which enemies are fought in any location. Where the most northwest grid-square is

, from there to the east it will be

and to the south it will be

contains Pravoka, and to the east is

all contain the same enemy formations not much tougher than Pravoka's.

However, the very northern tip of the peninsula infringes on the square that covers a large section of the area surrounding Lufenia, including the town itself. In this square,

, the enemies fought are built for the late stage of the game after the airship is obtained.

While not exactly a Peninsula of Power, in the NES version of Final Fantasy exists a short, 3 tiles-long area south of the mountains underneath the Yahnikurm Desert, consisting of only Goblins. This is caused by the same oversight, as these tiles are covered by square

, the same square as the entrance of Matoya's Cave.

A few tiles to the south of Altair, the player can encounter Mysidian area monsters. The monsters can only be encountered on the three horizontal tiles in the shore.

This area can be accessed right after Goldor Manor. From Amur, the player must fly north. The area does not look like a peninsula, but is the same concept as the Peninsula of Power from Final Fantasy. The grid ends one tile after the mountainside, and this horizontal strip of land contains monsters from around the Crystal Tower area, which are monsters intended to be fought near the end of the game. This does not apply to the 3D versions.

The monsters fought north of Mt. Ordeals are those from the Mythril and Troia areas. The grid tries to cover all the islands north of Mt. Ordeals, but has been done poorly, resulting in early access to stronger monsters. This is still available in the Final Fantasy IV: The Complete Collection version. This does not apply to the 3D versions.

Additionally, the monsters on some of the tiles in the eastern areas of Troia are the weaker monsters from Kaipo.

In the World of Ruin, there is a peninsula with six trees directly east of Kefka's Tower; its random encounters are set to default, resulting in encounters that solely involve Leaf Bunnies and Darkwinds, one of the first enemies fought in the game found right outside Narshe. 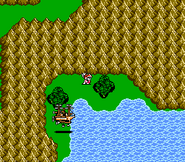 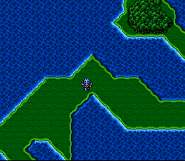 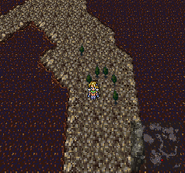