I'll be going too, of course. Every good sky pirate needs a partner, right?

Penelo is a playable character in Final Fantasy XII and Final Fantasy XII: Revenant Wings. She is Vaan's childhood friend and dreams of being a dancer, and has learned martial arts from her elder brothers. Following an encounter with a sky pirate and the misunderstanding it causes, Penelo becomes involved in a world-scale conflict that could determine the fate of Ivalice. She also makes a cameo playable appearance in Final Fantasy Tactics A2: Grimoire of the Rift.

In Final Fantasy XII: Revenant Wings, Penelo's hair is longer, styling it in two plaits, and she wears a short gray top that bares her midriff, baggy dark red pants with gold patterns and purple criss-crossing along the sides, and gold shoes that curve at the toe.

Try to grow up, please.

As Vaan's close friend, Penelo acts as the "careful side" of his reckless persona and often tries to appeal to his common sense, but without a desirable effect. She is one of the many orphans in Rabanastre and was taken under the wing of Migelo, a local shopkeeper, and helped him since then. Due to the war taking the lives of her parents, she lives in fear of the Archadian Empire, but Penelo overcomes her fear thanks to her unlikely friendship with Larsa Solidor, a member of the Empire's ruling family.[1] Penelo, together with Vaan, acts as a humanizing element representing the common folk caught in the crossfire of international conflict. Looking to Vaan and Penelo keeps Ashe grounded and able to resist the temptations of the Occuria, and looking to Penelo helps make Larsa sympathetic to the Dalmascan plight.

I'll keep that in mind. Can't count on Vaan to keep track of these things. That's for sure.

Penelo grew up in the Royal City of Rabanastre with her family. Five years ago a plague hit, but Penelo's family survived. Vaan's parents were not as lucky, and Penelo's family cared of both the orphaned Vaan and his elder brother, Reks. Three years later, Archadian Empire invaded the Kingdom of Dalmasca and Penelo's parents and Reks were killed in the conflict. Penelo was taken in by her parents' friend, the bangaa Migelo, who let her and Vaan work at his sundry shop, doing various odd-jobs.

Penelo is frustrated with Vaan's obsession with becoming a sky pirate, and tries to dissuade him from getting into trouble. On the day Vayne Solidor from the Archadian ruling house and heir to the throne comes to Rabanastre as its new consul, Penelo lectures Vaan about stealing from Archadian soldiers. The pair later witnesses Vayne holding a speech in front of the crowds.

Penelo meets up with Vaan at the Giza Plains nomad camp when Vaan is trying to obtain a sunstone to sneak into the Royal Palace of Rabanastre. She helps Vaan in his errand and later admits she enjoyed their time together. They part ways when they return to Rabanastre and Penelo urges Vaan to stay out of trouble.

When she hears intruders have been caught trespassing the palace grounds she rushes to the site, knowing it had been Vaan's plan. She sees Vaan, together with the sky pirates he had met in the palace, being led away in chains. She tries to run to Vaan, but Balthier, one of the sky pirates, assures her Vaan will be safe and gives Penelo his handkerchief.

Penelo's encounter with Balthier is spotted by the headhunter gang led by Ba'Gamnan, who mistakenly assumes Penelo knows Balthier. The gang kidnaps her, leaving a note for Balthier to meet with them at the Lhusu Mines in Bhujerba if he wants to save her.

Penelo is freed by her captors when Balthier shows up, him and Vaan having escaped from the Nalbina Dungeons with Basch fon Ronsenburg's aid. Penelo wanders through the Lhusu Mines but is caught by Archadian soldiers, angry at having discovered her inside the mine, the place where Archadia is involved in a secret magicite mining operation.

Penelo is brought to Judge Ghis, but Larsa Solidor, Vayne's younger brother, comes to her aid, and leads her away to Marquis Ondore's mansion. The two befriend, but Penelo is initially reluctant to trust Larsa due to him being Vayne's brother and her fear of the Empire. Larsa explains how the men of his family are taught to put the needs of others first, and having earned her trust, lends her a piece of manufacted nethicite, a top secret item from the Draklor Laboratory. Penelo, not realizing its value, keeps it as a good luck charm.

Penelo joins Larsa onboard the Dreadnought Leviathan, the flagship of the eighth Archadian Imperial Fleet commanded by Judge Ghis. She reunites with Vaan, whose party had been sent in by the Marquis to save Ashe, the Princess of Dalmasca who was being kept in captivity by Ghis. The piece of nethicite Larsa had given her protects the party from Judge Ghis's magick. Penelo escapes with the band of sky pirates and asks that Vaan let her follow through their journey to defeat the Empire and restore Dalmasca.

Along their quest, Penelo and Vaan exchange knowledge about Ivalice with the rest of the party. They meet Larsa again who begs Princess Ashe to make a truce with the Empire to prevent an all-out war with the Marquis's Resistance and the Rozarrian Empire gaining power by the day. Larsa accompanies the party on their journey for a while, and in Henne Mines they run into more of the Empire's secret experiments with manufacted nethicite. Upon seeing Mjrn possessed by the manufacted nethicite, Larsa asks Penelo to return the piece he had given him, apologizing for not realizing the danger. Larsa leaves the party when it comes clear truce with the Empire is impossible as Vayne has become the new Emperor.

After they defeat Vayne and bring peace to the world, the party parts ways with Penelo and Vaan returning to their old lives in Rabanastre, although Penelo keeps in touch with Larsa, who is now the Emperor. One year later, Penelo has achieved her dream of becoming a dancer and joins her friend Vaan, now a sky pirate with his own airship, as his partner.

Vaan's childhood friend, always there to lend a helping hand--or a proper scolding. Penelo is ever the faithful navigator, even when Vaan strays off course in new (and alarming) ways.

Penelo and Vaan travel Ivalice looking for treasure. They meet up with Fran and Balthier in the Glabados Ruins and find two shards of auracite, one of which is given to Vaan and Penelo as their introduction to sky pirating. The ruins collapse and they escape on Balthier's Strahl while Vaan and Penelo lose their airship.

With no means to continue sky pirating, Vaan and Penelo return to a quiet life in Rabanastre. Penelo is relieved because she no longer has to worry about Vaan putting himself in danger; however, she is afraid Vaan would never be content in a life without adventure. With the arrival of the derelict outside Rabanastre, her fears prove true as Vaan sneaks into the ship and steals it.

Although she is reluctant to go, Penelo agrees to travel with Vaan to the sky continent of Lemurés. She mans the cafe at the Galbana's Sky Saloon, and sends Vaan and the others on missions to collect food items.

While in Lemurés, the party comes across a wounded soldier named Velis in an island otherwise only occupied by Yarhi. After she treats his wounds, Penelo and Velis become close, much to Vaan's dismay. Velis reveals he is dead, an illusion, and once he tells Penelo the truth, the Judge of Wings arrives and turns him into his true form as the Yarhi Odin. The party is forced to fight Velis, but Penelo holds back, unwilling to hurt her friend.

They discover the Judge of Wings was being manipulated by Feolthanos who sleeps in the Keep of Forgotten Time waiting for a time he can invade Ivalice. The party infiltrates his abode and fells him, and the sky continent falls apart and the Galbana departs to places unknown. Again without an airship, Penelo and Vaan return to Rabanastre.

In the secret ending Penelo and Vaan sneak out of Rabanastre at night, only to be caught by their friends Filo and Kytes. Vaan picks up Penelo and makes a mad dash for it while Filo and Kytes pursue with several Yarhi, not wanting to be left behind from a new adventure. 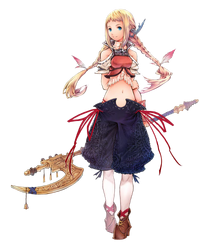 After fighting alongside Vaan in the Moorabella Aerodrome, Luso meets Penelo when she shows up to scold Vaan for going to the wrong Aerodrome hangar. When she forces Vaan to apologize to Luso for nearly stealing his mark, Vaan leaves, mumbling about how one of his other leads being a waste of time. Penelo turns to Luso and tells him this is Vaan's way of apologizing, by giving him a head start on a good treasure lead.

In Final Fantasy XII Penelo has high MP, Magick Power and Vitality, but her Strength and physical stats are low. Her initial licenses are White Magick 1, Daggers 1 in all releases, Light Armor 1 in the original releases, First Aid and Mystic Armor in the Zodiac releases. Her Quickenings are Intercession, Evanescence and Resplendence.

In Final Fantasy XII: Revenant Wings Penelo has a set job, which is a hybrid of White Mage and Dancer, and she wields staves as her weapon, wears dance gear as armor, armlets as her accessories, and uses White Magick. She cannot do physical harm to enemies, as her normal action is to cure nearby allies.

In Final Fantasy Tactics A2: Grimoire of the Rift Penelo's unique job is Dancer, though she now has the degenerating dances of the Final Fantasy Tactics Dancer. She can access viera jobs. To recruit Penelo, the player must be at the last quest before fighting Illua and go to Fluorgis and an event bubble will pop up. 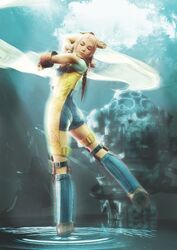 ), of her dancing in a forest, but this scene was never seen in the final product. A similar scene was later seen in Final Fantasy XII: Revenant Wings.

The scene where Penelo is tied up in Ba'Gamnan's Lhusu Mines hideout was cut from the original Japanese version of the game to get a lower rating. Producer Akitoshi Kawazu has explained the decision to do this thusly: "[...] at the time right before the Japanese release there were various incidents in the real world which...basically there were some similarities there that would have made it a difficult thing to release at the lower age rating that we wanted."[2]

This is a rare case of a Final Fantasy game being censored for Japan, but not for overseas versions. The "incidents in the real world" Kawazu refers to, but does not specify, may refer to Tsutomu Miyazaki, a Japanese serial killer who abducted and murdered four young girls in Saitama and Tokyo Prefectures from August 1988 to June 1989. His death sentence was upheld by the Japanese supreme court in January 2006, two months before Final Fantasy XII came out.

In both languages, Penelo and Vaan speak in a more casual style than Balthier, Basch, and Ashe, who speak more formally.

Template:Listen Penelo's theme in Final Fantasy XII is simply titled "Penelo's Theme" (パンネロのテーマ, Pannero no tēma?). It is a light, cheerful piece that prominently features woodwind instruments. It is played near the beginning of the game, when Penelo scolds Vaan for stealing, and when she joins him in the Nomad Village.

A piano arrangement of the theme is included on the Piano Collections: Final Fantasy XII album.

Penelo has made appearances in the following games in the Final Fantasy series:

Penelo has made key guest appearances in the following non-Final Fantasy games:

"Penelo" is a shortened version of the name "Penelope". [view · edit · purge]Penelope was Odysseus's wife who remained faithful to him while he was journeying home after the Trojan War.