Penelo makes a cameo as a tutor from the in-game manuals, the Character Info, in which she expresses her personal opinions on each character. She does not seem to like all the heroes, namely the Warrior of Light (too tough on himself and others), Firion (intimidating), Cloud Strife (not interesting), Squall Leonhart (should talk to a wall), and Zidane Tribal (too flirtatious).

She does appear to like some Warriors of Chaos, like Garland (suspecting he may secretly be a big softie), Cloud of Darkness (calling her snake-tendrils cute and wishing she had them), Golbez (seeing him as a sweet older brother), and Jecht (commenting him to have the body of a bronzed god). She also expresses her discontent that Gabranth, and not Vaan, is representing Final Fantasy XII in the game.

She refers to Vaan and Kytes by comparing them to Bartz and Onion Knight, respectively, and admits on idolizing Terra of Final Fantasy VI due to being the lone female on the current Warriors of Cosmos, and for her mature personality.

Penelo returns in the same role she had in the previous game, as a tutor for the Character Info of old, new, and secret characters introduced in the game. Penelo is more positive in the descriptions of the characters including more complimentary comments regarding heroes she did not like in the first game, namely the Warrior of Light (confident), Firion (straightforward and manly), Cloud Strife ("he's so cool"), Squall Leonhart (masculine), and Zidane Tribal (looks pretty refreshing in his new Knight of Pluto outfit). This could be due to Vaan's inclusion.

Several of the Warriors of Chaos she did not like in the first game, Penelo also has nice things to comment on, specifically Kefka (the more you look at him, the fonder he becomes), and the Emperor, who in Dissidia she said she does not "even want to see that guy's face!", to now saying although he's still the "same old mean guy", she likes his new outfit.

In the daily Mognet mail, Penelo is indirectly mentioned in a mail sent by Sablé. The mail is a survey about her disappearance as a helper girl from an item shop in the Royal City of Rabanastre.

This is Big, Kupo

Hey, {player's name}! Listen, kupo! A helper girl from the item shop in the royal city of Rabanastre has gone missing, kupo! I'm so worried, kupo! I just don't know what to do...

The following mail explains the girl is Penelo, if the player chose the "Give me some details" reply.

I heard that the item shop girl was kidnapped by a band of bangaa, kupo. They were apparently mouthing off names like "Bal" and "Thier", whatever that spells out, kupo. Oooh, I just hope she's alright, kupo!

The following mail is replied on the next day. The mail explains about Penelo's work ethics and apparently comparing her to Vaan.

Penelo appears as an obtainable character.

Penelo appears as a playable character. Her initial weapon is the Blind Dagger.

Penelo appears as a Legend.

Resplendence (UR+).
Add a photo to this gallery

Resplendence (UR+).
Add a photo to this gallery

Penelo is a playable character who could be recruited during the Challenge Event Tempered Resolve as the First Time Reward for completing the event's Light Cruiser Shiva stage on the Classic difficulty. She was also available in Consorting with Sky Pirates.

Penelo appears as a vision obtainable through summoning. Her job is Dancer. Her trust mastery reward is Equip S Sword. She possesses the special abilities Curing Waltz, Jitterbug Duet, MP +20% and Sword Dance. She possesses the magics Water, Aero, Blizzara, Shell and Faith. Her limit bursts are Intercession and Evanescence.

No. 081: A young lady from the world of Ivalice, beyond the Farplane. After losing her family to the war, she was fostered together with her childhood friend Vaan. Earning her keep at a sundry shop at Rabanastre, she is a leader-like figure among her fellow orphans, who respect her for her wisdom and gentle disposition. She worries for the impulsive Vaan, who seethes with hatred for the Empire after the death of his brother.
No. 082: A young lady sung of in tales of the far-off world of Ivalice. Orphaned after the war, she was taken in and raised with her childhood friend Vaan, the two remaining inseparable until Vaan is caught consorting with pirates in the palace and led away in chains. Penelo is subsequently kidnapped by the ruthless bounty hunter Ba'Gamnan, but the friends are eventually reunited, once again becoming close companions on their quest. Penelo warmly watched over her friend as he grows from his experiences.

Entries for different versions of Penelo. 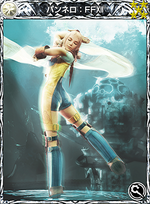 Penelo appears in the Japan-exclusive Final Fantasy trading card game published by Square Enix. Her cards are either earth or wind-elemental. One of her cards depicts a scene of her dancing in a forest that was cut from Final Fantasy XII.

Penelo.
Add a photo to this gallery

Penelo is a character in Dragon Quest & Final Fantasy in Itadaki Street Portable.

Penelo will appear in Puzzle & Dragons as part of the Final Fantasy collaboration. She will be introduced in the collaboration event that will happen in the North American version of the game from November 28, 2016 to December 11, 2016.