Penance is the most powerful superboss in the PAL, International, and HD Remaster versions of Final Fantasy X. It is located in the Calm Lands, but fought on the deck of the airship alongside Left Arm and Right Arm. Penance is released after the Dark Aeons, also powerful optional bosses, have been defeated. After all Dark Aeons are defeated, a scene will show that Penance is above the Calm Lands. The player needs to select Penance in the list of locations to fight it.

Penance's true nature is unknown. Although it's necessary to defeat all the Dark Aeons to face him, Penance isn't considered a Dark Aeon or fiend. The words "Ten botsu" are inscribed on a plate on the front of Penance in Spiran script. These are the Japanese words for sky/heaven and death.

Defeating Penance in the Final Fantasy X HD Remaster version earns the trophy/achievement Perseverance. Penance is one of three bosses considered impossible to defeat in a conventional "No Sphere Grid No Zanmato" challenge run. The other two are Shinryu and Nemesis.

Penance boasts 12,000,000 HP, high stats, absorbs elemental damage and has powerful attacks, making it what might be considered the most dangerous boss. Penance is accompanied by its two arms, Left Arm and Right Arm, which act independently with similarly powerful abilities, with 500,000 HP each. The arms regenerate a few rounds after defeat, but take twice as long to regenerate if killed via Doom. Though not visibly named, in the game data files, an arm dying is called Atrophy. An arm reappearing is called Regeneration.

Penance has two stages, with the second starting after it loses three million HP. In the first stage, its main attack is Obliteration, a group physical attack that inflicts Slow. In the second stage, Penance will begin using Immolation, which is a single-target physical attack that also drains all the MP from the victim and always causes Armor Break and Mental Break. Penance gains Haste upon entering the second form, but this only lasts for one turn.

Penance's ultimate attack is Judgement Day, which hits all party members for 99,999 HP and 999 MP. It is not possible to soft reset while being attacked by Judgement Day. Penance requires both its arms active to perform this move. Unlike Dark Yojimbo's Zanmato, it will not dispel Auto-Life, but the arms will get turns after reviving and are likely to finish the party off before they get a chance to recover. There is a secret counter for Judgement Day and Penance uses it when the counter reaches 19. The counter increases by one every time the party inflicts damage on it, and by one every time it uses Immolation.

Penance is imbued with Auto-Protect while in the first form, and with its high defenses, ordinary weapons will barely make a dent. Only the Celestial Weapons, which ignore all defenses, will be useful.

The arms will do most of the damage during the battle, but it is possible to prevent the arms from ever getting a turn. Both have powerful physical attacks, with the right arm able to petrify and instantly shatter a character, and the left will dispel any positive statuses, including Auto-Life. The right arm will use Calamity, which inflicts Poison, Silence, Darkness, Curse, and Full Break, and can also use Mighty Guard, which can heal Penance for over 100,000 HP a turn (up to 400,000+ HP per turn). The left arm uses Slowga, and also Tera-Graviton, which causes Darkness, Silence, Sleep, Doom, and deals magical fractional damage that will remove 75% of the characters' maximum HP and can kill the target. It is twice as powerful as Dark Anima's Mega-Graviton.

Energy Blast, Hellfire, and Thor's Hammer all have different animations when used against Penance.

The arms will drop Dark Matter, or rarely, Master Sphere, after each defeat, and even if the player flees from the battle they receive the rewards, making it sometimes more useful to farm Penance for the valuable items. Unlike most enemies, the arms do not give extra rewards for an Overkill; the body however, does give extra. In the HD Remaster and the International versions, overkilling the body will also cause an Overkill pop up to appear on any arms that are present.

Ribbon is not necessary, as with the correct strategy the player can prevent the arms from attacking and the only status ailments inflicted by the main body are Slow, which is blocked by Auto-Haste, and Armor Break, which cannot be blocked.

Quick Hit, Use, Cheer, and Dispel are useful commands. Useful items are Three Stars to allow the party to attack without using MP, Stamina Tonics to double the characters' HP, and a Purifying Salt to remove Penance's Haste upon entering the second form.

The party can use Rikku's Overdrive to reduce the damage of Penance's attacks. Mixing two Healing Springs to produce Ultra NulAll has the same effect as five Cheers, which can reduce the damage of Penance's attacks to below 9,999 because the party will take 1/3 less damage. If it is required to heal over 9,999 HP, a Healing Spring and Map can be mixed to produce Super Elixir that fully heals the party's HP and MP. To heal the party for 9,999 HP, the items Healing Water or Megalixir can be used.

In Penance's first form the body only attacks with Obliteration, which deals around 23,000 HP damage to the whole party, but the effect can be halved with Protect and further reduced by Cheer or Ultra NulAll to do less than 9,999 damage. With the right strategy, the arms won't get a turn to attack. As soon as the battle starts the party should kill one of the arms, because if the party kills both in the same turn, both will also revive in the same turn, meaning the party won't have enough turns to kill both arms after they regenerate. By killing one arm off instantly the player can ensure the arms won't regenerate together.

As soon as possible, a Three Stars should be used to reduce the MP cost to zero. Additionally, Ultra NulAll, or at least four Cheers, should be used to reduce the damage of Penance's attacks. The most effective strategy isn't to kill the arms as soon as possible, but to kill them right before their turn so they take longer to revive giving the party more time to attack the body. An arm is killed in six hits, so the best strategy is to start out by hitting an arm five times (with Quick Hit) leaving it in position where it can be killed at any time. After both arms have been hit five times the party can start attacking the body until the arms are about to get a turn, at which point the party should kill the arms. The party should never allow the arms to get a turn.

After taking 3,000,000 HP damage, Penance's tail will fall off and it will enter its second form. In its second form Penance's only attack will be Immolation, which deals enormous HP and MP damage to one target and also inflicts Armor Break. It is necessary to use the White Magic, Dispel, to remove the Armor Break status from the victim of the attack. Otherwise, the character will be killed if he or she is hit again. On the plus side, since Immolation only hits one party member at a time, counterattacks work, so Tidus, Auron, Wakka and Kimahri can remove a significant portion of Penance's health this way. The damage from Immolation can be reduced to about 4,500 using various protections.

During Penance's second form the party should continue on with the same strategy as in the first form, except to use a Purifying Salt to remove Penance's Haste status and Dispel to remove Armor Break from the victims of Immolation. It is not necessary to remove the Haste effect Penance casts when entering the second phase due to it only lasting one turn. Since Immolation is a single-target physical attack, Sentinel can interact with it. This will not only reduce the damage, but it allows the player to select the target of the attack. This can be useful to ensure a counterattack, as well as preventing Yuna or Lulu from losing their MP, weakening their damage. Due to Masamune's unique damage formula, Auron is the best choice for this, however, any character with a counterattack will work well.

As with any other enemy, Penance can also be killed instantly with Yojimbo's Zanmato. 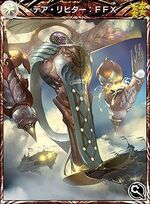 Main article: A Contest Of Aeons

"A Contest Of Aeons" plays during the battle with Penance. This is the same theme used for the fight with the aeons possessed by Yu Yevon. 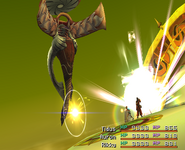 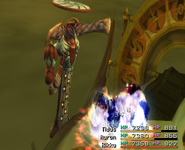 [view · edit · purge]Penance is repentance of sins as well as the proper name of the Roman Catholic, Orthodox Christian, and Anglican Sacrament of Penance and Reconciliation/Confession.

In the Japanese, French, Italian, and German versions, Penance is known as "Der Richter", which translates from German as "The Judge", fitting as it is considered the "last resort" of Yevon's attempt to subdue Yuna and her guardians for good, since the Dark Aeons failed. In the Spanish version, the boss is called "Verdugo Final", which can be translated as "Final Executioner".